Posted by jmullerwashingtonsyndicate in Uncategorized on February 19, 2021

Many thanks to the Frederick County Civil War Roundtable and the National Museum of Civil War Medicine for hosting and streaming the presentation.

Posted by jmullerwashingtonsyndicate in Uncategorized on February 4, 2021

In April 1879 United States Marshal of the District of Columbia Frederick Douglass visited Frederick City to deliver a lecture to benefit Quinn Chapel African Methodist Episcopal Church, led before, during and after the Civil War by reverends associated with Douglass and his family.

Learn more about the interconnectedness and relationship of local institutions and Fredericktonians to Frederick Douglass from students at Howard University to caterers, barbers, ministers, educators, physicians and politicians.

For more information and/or to register visit –> HERE!

In 2020, Muller co-founded Lost History Associates USA, www.losthistoryusa.com, along with Justin McNeil. They are currently working on a new book, Lost History of Frederick (Bailey) Douglass in Baltimore.

Over the past six months Muller and McNeil have canvassed old churches, cemeteries, schoolhouses, train stations, farmhouses, towns and roads throughout Western Maryland in pursuit of the community’s lost history. They plan to share some of their groundbreaking research into the connectivity of Frederick Douglass to the communities of Frederick County.

Posted by jmullerwashingtonsyndicate in Uncategorized on April 20, 2019

Muller to speak at Antietam Battlefield

John Muller, author of “Frederick Douglass in Washington, D.C.: The Lion of Anacostia,” will present on the topic of Frederick Douglass’s little-known history in Western Maryland at 11:30 a.m. and at 2 p.m. on Saturday, April 27, at the Newcomer House on the Antietam National Battlefield near Sharpsburg. Muller’s discussion will kick off The Heart of the Civil War Heritage Area’s 2019 Newcomer House Porch Program Series.

Posted by jmullerwashingtonsyndicate in Uncategorized on April 15, 2019

On Tuesday, April 9, 2019, the FSU’s Department of Sociology, Department of Geography and African American Studies Program hosted a presentation by John Muller. Muller, a self-described “street historian,” has authored two books, “Frederick Douglass in Washington, D.C.: The Lion of Anacostia” and “Mark Twain in Washington, D.C.: The Adventures of a Capital Correspondent” and is working on “Lost History: Frederick (Bailey) Douglass in Baltimore City, 1825–1895.”

His lecture described visits made by Frederick Douglass, the famous escaped slave, orator, and intellectual, to Frostburg and Cumberland, Md. in the 1800’s. Muller also discussed friends and political acquaintances of Douglass’ from Western Maryland. One such associate, Lloyd Lowndes of Cumberland, later became governor of Maryland from 1896 to 1900 and was honored on FSU’s campus with the naming of Lowndes Hall.

Born in 1818 in Talbot County, Md., Frederick Douglass escaped slavery in 183[8]. He became famous in 1845 with the publication of his memoir, “Narrative of the Life of Frederick Douglass, an American Slave.” The autobiography is considered one of the most influential pieces of literature to fuel the abolitionist movement of the 19th century in the United States. In his lifetime, Douglass became the first African American nominated for the Vice President of the United States on the Equal Rights Party ticket.

Muller’s presentation focused on the later years of Douglass’ life. In September 1879, Douglass traveled by train from Washington D.C. to Cumberland, Md. to give his “Self-Made Man” speech. This was not Douglass’ first contact in Allegany County, though, as he had written Letters to the Editor published in the Cumberland News in 1874. Nonetheless, the visit was an occasion shared by a mixed race audience. During his remarks, Douglass said, “I remember when it was not thought safe for me to have appeared among the mountains of Maryland.” The Frostburg Mining Journal covered the story saying, “Frostburg was fully represented.”

Douglass’ second visit to Allegany County was in March 1882 in support of the local African Methodist Episcopal Church in Frostburg. His second visit created less fanfare but was an intimate experience for attendees. The Frostburg Mining Journal wrote later that the lecture was given to a “small but intelligent audience…it was one of the best ever delivered in this town.”

Muller took questions from the over one hundred students, faculty, and staff present for his lecture. Many asked about the controversial nature of the relationship between Frederick Douglass and white women suffragettes. Muller impressively described the relationship between Douglass and Elizabeth Cady Stanton and Susan B. Anthony, both of which had critiques about the 15th amendment that allowed for the voting rights of African-American men. Muller was careful in his answers saying, “Frederick Douglass took incremental steps to advocate for women’s voting rights whenever possible.”

Posted by jmullerwashingtonsyndicate in Uncategorized on April 11, 2019

Earlier this week, a couple miles up the old National Road from the Queen City I had opportunity to present on the Lost History of Frederick Douglass in Western Maryland at Frostburg State University.

With promotional support of several local institutions, local media outlets, community historians and students and faculty from Allegany College of Maryland and Frostburg State University a hundred or so folks rallied up.

With thoughtful questions from both students and members of Emmanuel Episcopal Church in Cumberland a wonderful evening of history unfolded.

A special thanks to:

Commissioner Lynn Bowman providing a walking tour of the former Brownsville community, today the heart of the campus of Frostburg State University.

Photos taken during Q&A after departure of a dozen or more student to other demands on their time.

Posted by jmullerwashingtonsyndicate in Uncategorized on April 1, 2019

You may think you know his story but did you know he visited Hagerstown?!

In 1879 Douglass took a train to “Hub City” where he delivered an address to benefit Bethel African Methodist Episcopal Church.

Each presentation will be a half-hour history discussion.

The Newcomer House is located approximately ½ mile east of Sharpsburg along Maryland Route 34 (Shepherdstown Pike) on the western edge of the Antietam Creek.

Posted by jmullerwashingtonsyndicate in Uncategorized on March 20, 2019

Dr. Frederick Douglass may have self-identified as an Eastern Shore man but on more than one occasion he spoke in the mountains of Western Maryland.

While in 1879 Douglass spoke in Frederick City (early April), Hagerstown (late April) and in Cumberland on September 22 for Emancipation Day festivities, in March 1882 Douglass made an independent visit to lecture in Frostburg, Maryland. Originally founded as Normal School No. 2, Frostburg State University was not initially funded and opened to its first class for nearly two decades.

Author and street historian John Muller will detail the visits of Dr. Douglass to Cumberland and Frostburg, as well as share insights into his relationship with Cumberland-based Governor Lloyd Lowndes.

Join local history enthusiasts and community leaders for a debut presentation detailing a previously unknown high-profile visit Dr. Douglass made to Cumberland, Maryland, arriving by train, escorted through town by a large procession and speaking at the old fairgrounds in company of local AME pastors, politicians and community leaders.

Following the presentation will be a Q&A.

John Muller is the author of Frederick Douglass in Washington, D.C: The Lion of Anacostia (2012) and Mark Twain in Washington, D.C.: The Adventures of a Capital Correspondent (2013) and is currently at work on Lost History: Frederick (Bailey) Douglass in Baltimore City, 1825 – 1895. Muller has presented at the Library of Congress, American Library of Paris, Politics and Prose, Newseum and other venues. He has been featured on C-SPAN, WAMU, WYPR, WDVM and other local and national media outlets

In the past year Muller has presented a series of lost history lectures in Cambridge, Maryland at the Harriet Tubman Museum and Education Center, Hagerstown at the Washington County Central Library and Ebenezer AME Church, Denton at the Caroline County Public Library and in Baltimore City at the Enoch Pratt Central Library.

The lecture is open to the public and being presented with the support and partnership of the Department of Sociology, Department of Geography and Department of African-American Studies. The lecture will be in the Catherine R. Gira Center for Communications and Information Technology Building, Room 317.

Posted by jmullerwashingtonsyndicate in Uncategorized on March 15, 2019

Dr. Douglass may have self-identified as an Eastern Shoreman but on more than one occasion he spoke in the mountains of Western Maryland.

While in 1879 Douglass spoke in Frederick City (early April), Hagerstown (late April) and in Cumberland on September 22 for Emancipation Day festivities, in March 1882 Douglass made an independent visit to lecture in Frostburg, Maryland.

As surely many know, what is today Frostburg State University, originally founded as Normal School No. 2, was not initially funded and opened until nearly two decades later.

Introductory conversations I’ve had with local historians have been circumspect of Governor Lowndes, which I will seek to confirm or refute. What is beyond speculation is the correspondence and associations between Lowndes and Douglass span more than two decades.

From preliminary research it appears there was a local municipal election in Frostburg at the time of Dr. Douglass’ visit but I can’t confirm that he took a position.

On the extant contemporaneous buildings of Frostburg, around the same time as the pending visit of Douglass to the area, the local city council in Frostburg received a petition by the local A.M.E. church for a street lamp on its corner. The appropriation was approved.

Legendary Western Maryland historian Al Feldstein was kind enough to pass along a postcard of the Odd Fellows Opera House that reportedly burned down in the early 1900s.

I will be presenting at Frostburg State University on “The Lost History of Frederick Douglass in Western Maryland,” with an emphasis on the localities of Cumberland and Frostburg next month.

Hopefully the history will be received warmly and there will be an opportunity to present at the Appalachian Festival, when “Lost History: Frederick Douglass in Western Maryland,” develops into the book format it deserves.

Posted by jmullerwashingtonsyndicate in Uncategorized on January 4, 2019 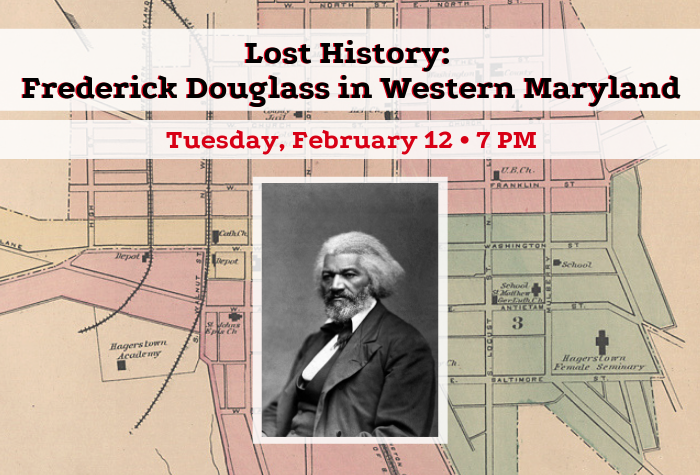 Frederick Douglass rose from the depths of slavery on Maryland’s Eastern Shore to travel three continents and counsel a half-dozen Presidents.You may think you know his story but did you know he visited Hagerstown?!

Hear historian and author John Muller share never before published details of Dr. Frederick Douglass’ visit to Hagerstown walking the community and lodging in the historic Washington House. Earlier in the day, John Muller will host a walking tour through the Heart of the Civil War Heritage Area.

This evening program is free to attend. Registration is not required, but is appreciated.