Video: “If I Survive: Frederick Douglass and Family in the Walter O. Evans Collection” @ National Gallery of Art

Posted by jmullerwashingtonsyndicate in Uncategorized on July 25, 2019

I have offered to take Dr. Evans and Prof. Bernier on a walking tour of Old Anacostia on previous occasion. They have not attended nor expressed an interest in attending. We hope they take an interest in the scholarship of Frederick Douglass as it pertains to the community he knew intimately for the last quarter-century of his life. We think it is the least to expect of Douglassonian scholars.

Posted by jmullerwashingtonsyndicate in Uncategorized on April 26, 2019

This weekend Pulitzer Prize-winning historian David Blight, Dr. Celeste-Marie Bernier, co-author of If I Survive, and Dr. Walter O. Evans and his wife Linda Evans, collectors and owners of the Frederick Douglass family scrapbook collection that was the genesis of Blight and Bernier’s books, will be in Washington City.

Professor Blight, in a series of talks across the county, has frequently mentioned that the last third of Douglass’ life has been overlooked. Although he cites Frederick Douglass in Washington, D.C: The Lion of Anacostia (The History Press, 2012) in his book 8 times he has yet to demonstrate any scholastic self-respect for the study of Dr. Douglass and mention my book.

I look forward to having these distinguished guests visit a scared community of Washington City that was integral to Frederick Douglass and his family for more than a quarter-century.

It is my understanding Prof. Bernier and the University of Edinburgh has been conducting walking tours of the Scottish city of Edinburgh so therefore it is more than appropriate and necessary that Old Anacostia is afforded the same scholastic respect and recognition as an indigenous and historic Douglassonian community.

We look forward to reporting back next week.

Professor Leigh Fought completed the walking tour a couple years back whereas her husband Douglas Egerton turned back due to apparent uncomfort with the temperatures.

There is an open invitation to Eric and Harriet Lowery and the entire Frederick Douglass Honor Society of Easton, Maryland, Director Chanel Compton of the Banneker-Douglass Museum and many other individuals and institutions which are in the line of business of Frederick Douglass to visit the neighborhood of Old Anacostia and learn about the community in which Dr. Douglass was an active and engaged citizen.

Posted by jmullerwashingtonsyndicate in Uncategorized on April 19, 2019

In the Library: Frederick Douglass Family Materials from the Walter O. Evans Collection opens at the National Gallery of Art in downtown Washington, D.C. April 22, 2019

“In the Library: Frederick Douglass Family Materials from the Walter O. Evans Collection” opens at National Gallery of Art -> April 22, 2019

Posted by jmullerwashingtonsyndicate in Uncategorized on April 12, 2019

In the Library: Frederick Douglass Family Materials from the Walter O. Evans Collection 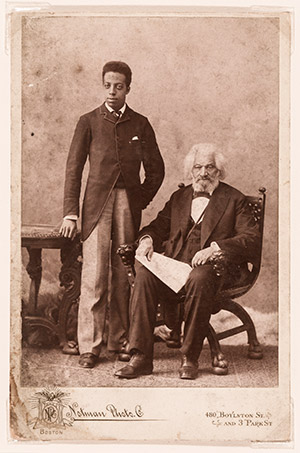 “I hope that in some small way my collecting will encourage others to do the same, and to recognize the importance of preserving our cultural heritage, providing a legacy for those who come after us.”

Walter O. Evans has spent decades collecting, curating, and conserving a wide variety of African American art, music, and literature in an effort to preserve the cultural history of African Americans. His home in Savannah, Georgia, is a repository of the artworks and papers of many important figures, and increasingly has become a destination for scholars. Part of his collection focuses on the nineteenth-century slave, abolitionist, and statesman Frederick Douglass (c. 1818–1895). In addition to inscribed books from Douglass’s and his descendants’ libraries and printed editions of his speeches, the collection contains letters, manuscripts, photographs, and scrapbooks. While some of this material relates directly to Douglass’s speeches and work promoting the cause of black freedom and equality, much of the material is of a more personal nature: correspondence between family members, family histories, and scrapbooks compiled by Douglass and his sons Lewis Henry, Charles Remond, and Frederick Douglass Jr. This family history provides a new lens through which to view the near-mythical orator. In addition to containing news clippings from many nineteenth-century African American newspapers that do not survive in other archives today, the scrapbooks, with their personal documents and familial relationships, illuminate Frederick Douglass in ways never before seen.

In 2018 Celeste-Marie Bernier and Andrew Taylor of the University of Edinburgh published If I Survive: Frederick Douglass and Family in the Walter O. Evans Collection, a guide to the collection born of a longstanding collaboration between the authors and Dr. Evans. Within its pages they have reproduced letters, manuscripts, and photographs from the collection along with transcriptions and commentary that provide an invaluable resource for Douglass scholars. The National Gallery of Art Library mounts this special-focus exhibition in conjunction with a lecture by Professor Bernier on Friday, April 26, 2019. Selections from the Walter O. Evans Collection include a majority of the family scrapbooks, photographic portraits of several members of the Douglass family, pamphlet editions and manuscript copies of several of Douglass’s speeches, letters to and from Douglass concerning various family members, and other related ephemera.

Organization: Organized by the National Gallery of Art, Washington

Passes: Admission is always free and passes are not required

Posted by jmullerwashingtonsyndicate in Uncategorized on August 29, 2018 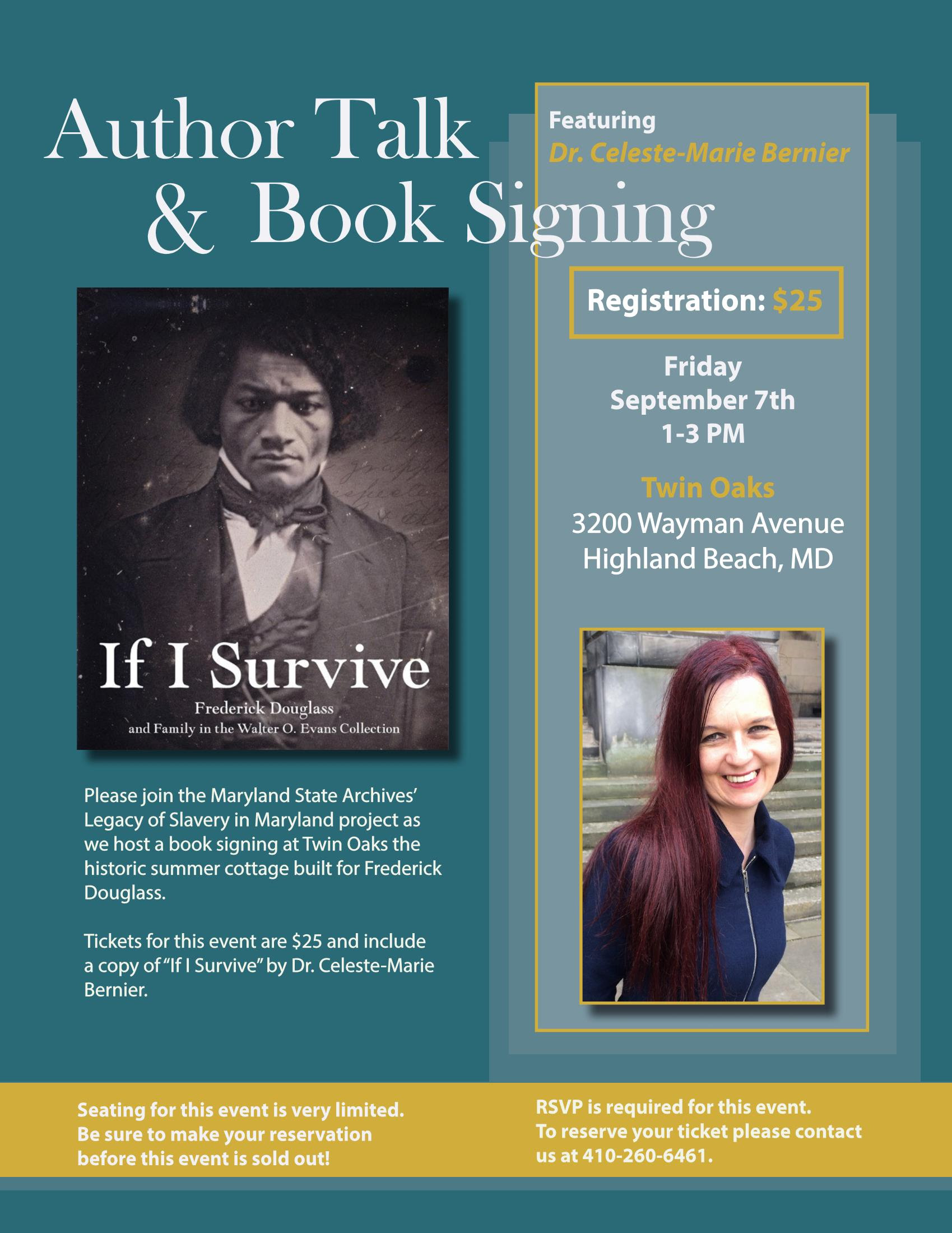 Please consider joining us for this very special event!
Seating is limited and is anticipated to sell out quickly.

Posted by jmullerwashingtonsyndicate in Uncategorized on August 1, 2018

Author Talk: If I Survive The Frederick Douglass Family’s Struggle for Liberty

While there have been many public Frederick Douglasses – the abolitionist, the statesman, the orator, the editor, the politician – it is now time to trace the many private lives of Douglass as a family man.

Sharing untold stories, this talk traces the activism, artistry and authorship of Frederick Douglass not in isolation but alongside the sufferings and struggles for survival of his daughters and sons.

Working with unpublished writings, letters and speeches and photographs, we learn that the fight for freedom was a family business to which all the Douglasses dedicated their lives.
A book signing will follow with the author.
———
Let us know you are coming

Posted by jmullerwashingtonsyndicate in Uncategorized on January 22, 2018

Working with the inspirational Frederick Douglass family materials held in the Walter O. Evans Collection, this talk will trace the activism, artistry and authorship of Frederick Douglass not in isolation but alongside the sufferings and struggles for survival of his daughters and sons: Rosetta, Lewis Henry, Frederick Jr., Charles Remond and Annie Douglass.

As activists, educators, campaigners, civil rights protesters, newspaper editors, orators, essayists, and historians in their own right, Rosetta, Lewis Henry, Frederick Jr., Charles Remond and Annie Douglass each played a vital role in the freedom struggles of their father. They were no less afraid to sacrifice everything they had as they each fought for Black civic, cultural, political, and social liberties by every means necessary. No isolated endeavor undertaken by an exemplary icon, the fight for freedom was a family business to which all the Douglasses dedicated their lives as their rallying cry lives on to inspire today’s activism: “Agitate! Agitate! Agitate!”

Celeste-Marie Bernier is Professor of Black Studies and Personal Chair of English Literature at the University of Edinbourgh and she is Co-Editor-in-Chief of the Journal of American Studies published by Cambridge University Press. Dr. Bernier is an esteemed international scholar, having won many notable awards. In 2010. she was the recipient of a Philip Leverhulme Prize in Art History while in 2011 she was awarded an Arts and Humanities Research Council Fellowship. In 2012 she was given a Terra Foundation for American Art Program Grant for an international symposium on African Diasporic art which was held at the University of Oxford. In 2010, she was awarded a University of Nottingham Lord Dearing Award for “Outstanding Contribution to the Development of Teaching and Learning.”

In addition to supervising large numbers of PhDs and MRes to completion, she has held visiting appointments and fellowships at Harvard, Yale, Oxford, King’s College London and the University of California, Santa Barbara, in addition to her recent position as the Dorothy K. Hohenberg Chair in Art History at the University of Memphis (2014-15) and her appointment (2016-17) as the John Hope Franklin Fellow at the National Center for the Humanities in Durham, North Carolina.

[Editor’s Note: In September 2014 we attended a lecture by Dr. Celeste-Marie Bernier in the Annapolis State House on the exhaustive research she and Prof. Zoe Trodd conducted in archives throughout the United States and world tracking down photographs of Douglass.]