Posted by jmullerwashingtonsyndicate in Uncategorized on March 3, 2021 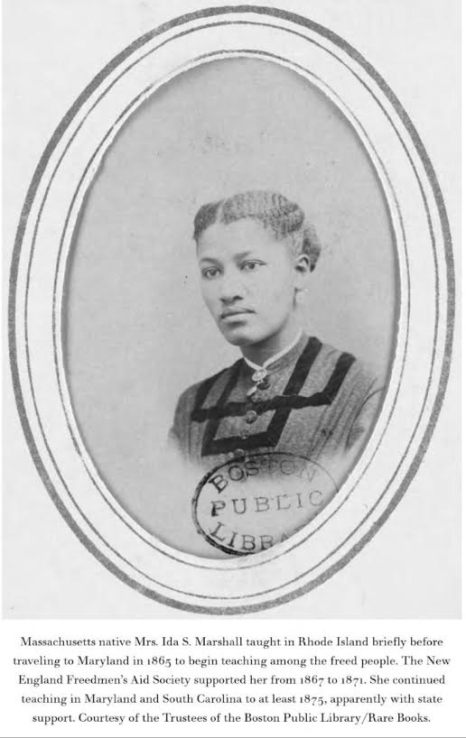 If you understand the depth of this lost history clap thrice.

In honor of Women’s History Month we take a moment or two to recognize the radical, fearless and tireless educators that worked alongside and within the reformist networks and circles of influence from the bottom of the map to up top.

More than two years ago we told you about Rev. Henry Augustus Monroe, a member of the drum corps of the 54th Massachusetts Volunteer Infantry Regiment who after the War deployed as a teenager to the Potatoe Neck of Somerset County to teach school with the Freedmen’s Bureau.

Today, we share with you an associate of Rev. Monroe’s who similarly came from up top in New England to work below the Mason Dixon Line for the educational and civic improvement of descendant communities throughout the state of Maryland.

Leading Freedmen Bureau affiliated classrooms and school houses in Harford, Kent and Howard counties, Principal Ida Marshal has apparently been overlooked and unrecognized by various private historical and educational organizations, institutions of higher learning and state-sponsored history and heritage agencies. Records indicate Marshall also taught in Delaware, areas of the American South, and in the mid 1870s returned to Maryland to teach in Howard County.

Within the philanthropic and educational networks of “colored” primary schools preparing students to attend institutions of higher learning within the regions of Baltimore, Philadelphia and Washington City, Principal Marshall, Rev. Monroe and Frederick Douglass are all closely connected.

For those that care to know, learn, and discuss the history with a fidelity to the integrity of the community give yourselves a clap or two.

This post is in recognition of Honorable Mrs. Merrion, formerly of Rosa Parks Middle School, and all legendary teachers who have ever taught. Your students do not forget.

Image of Principal Marshall, page 50 of Schooling the Freed People: Teaching, Learning, and the Struggle for Black Freedom, 1861-1876 (UNC Press, 2010)

Below are two images indicating Principal Marshall with the Freedmen’s Bureau School in Elk Ridge Landing in Howard County, Maryland.

United States, Freedmen’s Bureau, Records of the Superintendent of Education and of the Division of Education, 1865-1872

United States, Freedmen’s Bureau, Records of the Superintendent of Education and of the Division of Education, 1865-1872