Posted by jmullerwashingtonsyndicate in Uncategorized on April 9, 2021

Frederick Douglass in the city of Frederick, that is.

John Muller, an author, speaker and historian, led the tour. His book, “Frederick Douglass in Washington, D.C.: The Lion of Anacostia,” was published in 2012, and as a result of the continuous research on Douglass in D.C., he has offered walking tours on the Eastern Shore, Baltimore and throughout Washington D.C., as well as Frederick and western Maryland locations.

Douglass visited Frederick in April 1879, where he spoke in present day Brewer’s Alley and gave a lecture to benefit what is today Quinn Chapel African Methodist Episcopal Church.

“Frederick City is an important component of Frederick Douglass’ activism within the state of Maryland,” Muller said. “So this is just an opportunity to connect with the local community to kind of discuss and further the local history. And it’s really part of kind an ongoing process to uplift an awareness and recognition of Frederick Douglass throughout the state.”

The tour, entitled “Lost History Walking Tour: Marshal Frederick Douglass & Frederick City,” began on South Bentz Street at the Roger B. Taney House and was set to wrap up at the Quinn Chapel African Methodist Episcopal Church. It lasts about two hours.

Douglass, who was born in 1818 and  escaped from slavery in 1838, was a human rights leader, abolitionist and  the first Black citizen to hold high rank in the U.S. government.

Muller has been leading walking tours since about 2013, starting the program mainly in Washington and Baltimore. This is now the sixth or seventh time he’s offered the tour in Frederick, where he’s been leading them since 2019, he said.

“I’ve been in touch with different community organizations and leaders within Frederick and have done some research at the Maryland Room at the C. Burr Artz Library … so just kind of been a continuing, ongoing process to become more familiar with the community,” he said.

Muller said he generally has a good response to the tour.

“The tour’s conversational, so I try to ask people where they’re from and then maybe make my talking points specific to where they’re from,” he said. “And people are always very interested to learn that there is history in Frederick that is kind of beyond the scope of the Civil War, because the Civil War thematically is so heavy, and this is more kind of Reconstruction.”

When Douglass spoke in Frederick, the tour leader noted, he was on stage with Frederick native Dr. Lewis Henry Steiner, who, following the Civil War, advocated for schools for Black Americans and later was the lead librarian of the Enoch Pratt Free Library in Baltimore.

“[The tour] is integral to the history of the city in terms of the religious networks, the African Methodist networks that are essentially expanding westward from Baltimore City, and many of these connections that Frederick Douglass had with Baltimore, these gentlemen come out to western Maryland,” Muller said. “It’s kind of trying to put the pieces of the puzzle of a larger Black history in the state of Maryland and connecting Frederick not just hyper-local Frederick, but Frederick in the context of the state history.”

Mykáh Frazier and her mom, Marlo Frazier, attended the walk together. The two are from South Carolina and are visiting the D.C. area.

“Most of the museums [in D.C.] are closed and so I was like, ‘Well, I want to do something history related.’ I like history, and I was going through events in the area and I saw that there was a Frederick Douglass walking tour, some lost history,” Mykáh Frazier said.

A political science major, Frazier was drawn to the tour and said she was looking forward to seeing the actual landmarks and having a good visualization of those landmarks.

While the tour provides a wealth of information, Muller said he hopes one thing people gain is the knowledge that as the tour processes down Market Street and 3rd Street, they’re following in the footsteps of many famous Marylanders, Douglass included.

Muller noted that the institution that Douglass spoke to benefit, Quinn Chapel AME Church, is still an active and integral part of the community.

“That history connects from today back to 1879,” he said.

Posted by jmullerwashingtonsyndicate in Uncategorized on February 19, 2021

Many thanks to the Frederick County Civil War Roundtable and the National Museum of Civil War Medicine for hosting and streaming the presentation.

Posted by jmullerwashingtonsyndicate in Uncategorized on January 22, 2021 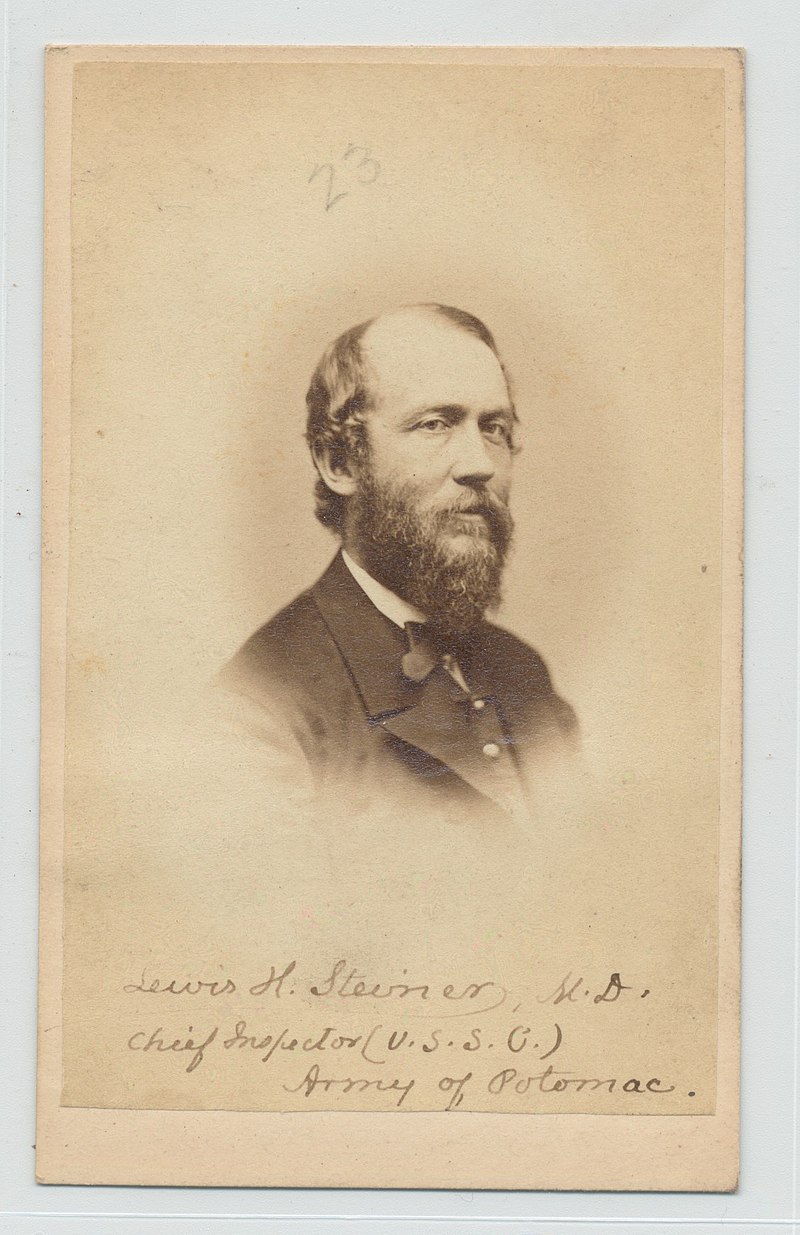 As an adolescent Frederick Bailey ear hustled rudimentary academic instruction from the doorways at Wye House on the Eastern Shore to the alleyways of Fell’s Point in Baltimore City. As an adult he served on the boards of colleges and universities.

Having never attended a formal day of school in his life Dr. Douglass was regarded and respected by the most learned men and women of his era from college presidents to national legislators on both sides of the Atlantic Ocean before he was yet 30 years old.

Part of the inspirational and aspirational story of the life of Dr. Douglass is his personal commitment to radical education across time and geography and institutions from Sunday schools to primary schools to the university to the modern American library.

Lost in the diabolical scandalmongering peddled by mythomanes is the street history of Dr. Douglass, a man of infinite real-world associations, connections and relationships. How the history and life work of Dr. Douglass connects to today has yet to be told more than a century after his passing due negligence, incompetence and state-sanctioned ignorance.

Specifically, Marshal Douglass shared the stage in Frederick with Dr. Lewis Henry Steiner, a local to the area and advocate for equal education.

Upon its opening in 1886 Dr. Steiner was the lead librarian of the Enoch Pratt Free Library. Dr. Steiner, as well as other leadership and administrative staff of Enoch Pratt, knew Dr. Douglass.

Before the central branch re-opened and before the public health crisis I was applying pressure to the administration of Enoch Pratt Free Library to see how much they knew, or rather did not know, about the connections of Frederick (Bailey) Douglass to the library.

My correspondence with staff of the Enoch Pratt Free Library are all a matter of public record, as are the extant records of the library. I received a personal call after 8:00 PM one evening from a staff member thanking me for the continued pressure I was applying to the library leadership yet sharing that while the archival records I was seeking should exist they weren’t sure if they had them or where they may be. And that is how it be and why the history has been so utterly lost and mythologized by sustained public ignorance.

Do you think Frederick (Bailey) Douglass supported the Enoch Pratt Free Library? Of course he did.

Organizations within Frederick, the state and region who can aid in educating the public include Elizabeth Shatto with the Heart of the Civil War Heritage Area, John Fieseler with Visit Frederick, Drew Gruber with Civil War Trails, Frederick County Public Library, leadership of AARCH and others.

Posted by jmullerwashingtonsyndicate in Uncategorized on June 12, 2020

Fair use is any copying of copyrighted material done for a limited and “transformative” purpose, such as to comment upon, criticize, or parody a copyrighted. This is fair use of the template of Civil War Trails, Inc.

Professionalism is paramount. We can no longer dither on the sacred and lost history.

As Richard Sherman told Michael Crabtree, “Don’t you ever talk about me and my research.” And I won’t name names but I will.

Don’t you ever talk about me and my research. Ever.

Posted by jmullerwashingtonsyndicate in Uncategorized on February 26, 2019

This past weekend I had the opportunity to present “Frederick Douglass in Western Maryland” at the Master Docent Series Workshop 2019 held in Frederick City, Maryland at the Delaplaine Arts Center.

A hundred people or so squeezed into the impressive space to hear from a series of wonderful presentations focusing on the history of Frederick County and surrounding communities.

Many in the crowd were moved by a local documentary on Frederick’s African-American community that included an interview with a sharp 105-year old woman who recalled days gone post. A local “roads scholars” presented his documentary work photographing and researching more than 30 extant historic school houses in Frederick County and a local railway scholar presented on intra-community streetcars which connected more exurban and rural communities to the market places of Frederick and Hagerstown.

Many thanks to Mary Mannix and Carolyn Magura of the Maryland Room of the Frederick County Public Library for sharing their research expertise as super librarians and kind invitation to present.

Look forward to connecting more with Frederick City in the near future.

Posted by jmullerwashingtonsyndicate in Uncategorized on December 28, 2018

“Frederick Douglass and the Lincoln Family”

You may think you know his story but did you know Douglass visited Hagerstown?!

Using newly discovered information found in public and private archives, Muller will share information that uplifts the history of consequential visits Douglass made to Frederick City, Hagerstown and Cumberland, as well as lifelong associations Douglass had with abolitionists, politicians, and faith and community leaders of the Cumberland Valley region.

John Muller, author of Frederick Douglass in Washington, D.C.: The Lion of Anacostia and Mark Twain in Washington, D.C.: The Adventures of a Capital Correspondent, will present “The Lost History of Frederick (Bailey) Douglass in Baltimore” using newly discovered information found in the Baltimore City Archives, Maryland Historical Society, Enoch Pratt Free Library, and private archives. Muller has presented widely throughout the DC-Baltimore metropolitan area at venues including the Library of Congress, Newseum, Politics and Prose, American Library in Paris and local universities. He is currently working on a book about the lost history of Frederick Douglass on Maryland’s Eastern Shore.

Writers LIVE programs are supported in part by a bequest from The Miss Howard Hubbard Adult Programming Fund.

Have you heard stories of Frederick Douglass stepping through the country roads of Brinklow and Sandy Spring?

According to oral tradition Dr. Douglass, an internationally known abolitionist, statesmen, orator and journalist, was known to visit multiple families in our area.

Emily Edmonson Johnson, born an enslaved person in Montgomery County and an escapee of the Pearl in 1848, was photographed with Frederick Douglass and other abolitionist at a convention to protest the 1850 Fugitive Slave Law. Following her education at Oberlin in Ohio and serving as a teacher at the Miner School in Washington, D.C., Edmonson married Larkin Johnson in the early 1860s and lived in the Sandy Spring community for nearly a decade. She later moved to Hillsdale in Washington, D.C., adjacent to Anacostia where her friend Frederick Douglass lived which is preserved as the Frederick Douglass National Historic Site.

Find out more about Frederick Douglass and his connections from Sharp Street Church to state politics in post-Civil War Maryland and unknown visits to communities from Cumberland to Cambridge.