Posted by jmullerwashingtonsyndicate in Uncategorized on October 7, 2021

On a recent walking tour I shared some brief insights into the humorous disposition of Frederick Douglass and his fondness to make jokes in public and private settings. On this blog, on occasion over the years, we have shared examples of the humor of Douglass that can be found in his speeches, writings, official government records and newspaper reports.

As cited in a 2003 journal article, “‘He Made Us Laugh Some:’ Frederick Douglass’s Humor,” in Life and Times Douglass wrote, “I have been greatly helped to bear up under unfriendly conditions, too, by a constitutional tendency to see the funny sides of things, which has enabled me to laugh at follies that others would soberly resent.“

The account below demonstrates one of the incidents where Douglass could enjoy a joke.

From the Cincinnati Times-Star.

Frederick Douglass often laughed over a witticism of Mrs. Fred Grant’s at his expense, when they met at the Chicago convention of 1888. “I was sitting with Mrs. Grant and her party watching the balloting,” said he to a friend. “To my surprise, one vote was cast for me for President of the United States. It had no sooner been announced by the tellers than Mrs. Grant turned to me, and, with the most charming smile imaginable, said: “You must be the dark horse of this convention, Mr. Douglass.” 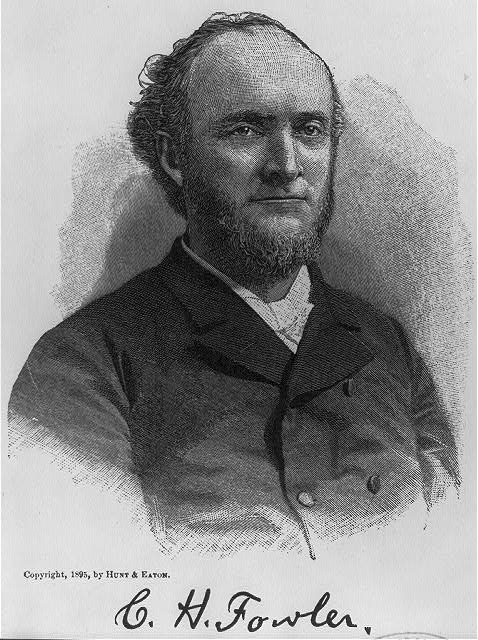 Thousands of eminent men have arisen from the ranks of the colored race since 1865, and thousands are now upon their feet also. Their names have reached the ends of the earth. But Fred. Douglass was early in the field, and he was a very, very bright particular star.

Like John Bunyan, George Washington, and some few others, he shines for all time, and for the entire human race. He did a mighty work for God and humanity.

Of all those illustrious men who have been born of women, there has never arisen a greater man, in all the annals of time, than our congenial friend and brother, Fred. Douglass.

Posted by jmullerwashingtonsyndicate in Uncategorized on May 7, 2018 Galusha Anderson, fifth president of the University of Chicago, recalled his memories of Dr. Douglass while a student in Rochester.

As a fugitive slave-scholar Dr. Frederick Douglass used his life experiences to educate the educated.

One of the first universities which welcomed the teachings of Dr. Douglass was the University of Rochester, founded in 1850 just three years after Douglass launched The North Star.

We hope a city which prides itself on its association with Dr. Douglass would take interest in the continued unknown research being advanced by the author of Frederick Douglass in Washington, D.C.: The Lion of Anacostia.

As a W Street Douglassonian the street corner has been our seminar on Dr. Douglass. It is from whence the imperative and mandate to uplift fallen history originates.

Along with documenting the relationships between Dr. Douglass and M. B. Anderson, Heman Lincoln Wayland and John Henry Raymond — all who served the University of Rochester during its early years — we continue to bring forth militant scholarship to elevate Dougassoniana Studies. Somebody has to.

According to a recent series of articles in Rochester’s City Paper there is a sincere interest among Rochesterians for a more expansive telling of the history of Douglass’ years in Rochester.

According to a recent article:

“We don’t have the kinds of sources historians rely upon to write the kind of study of a person and a place that readers demand today,” Hudson [an associate professor of history at the University of Rochester] says.

The destruction of Douglass’s home of 20 years closed the Rochester chapter of his life.

We find this curious and wholly inaccurate considering the author of Lion of Anacostia has now introduced more than a half-dozen unknown and previously unpublished letters, articles and anecdotes about Douglass in Rochester on this blog in recent weeks.

Maybe Rochester cares? They claim to. Therefore we ask University of Rochester claim its importance to the Rochester years of Dr. Douglass.

The University of Rochester is pivotal to the intellectual history of Dr. Douglass that has been untold and previously unknown. Don’t believe me. Believe the scholarship.

If University of Rochester does not know and acknowledge its own relationship with Dr. Douglass why posthumously award him a degree? To my untrained methods that seems half-honorific, half-dishonest.

If Dr. Douglass is going to be recognized and honored for his intellect let it be done with intellectual honor to scholarship. Right?

While a student at the University of Rochester in the mid-1850s Galusha Anderson frequently saw Dr. Douglass about town, attended his lectures and recalled the popularity of his newspaper among his classmates.

In a 1916 essay, Anderson provided a personal reminiscence, excerpts shared below:

It is not my purpose to give even an outline sketch of the fascinating life of Frederick Douglass. …

During my college days in that city I often saw him and at times heard him speak with ravishing eloquence. He edited a weekly paper, the North Star. Later it was named Frederick Douglass’ Paper. Though contending with manifold difficulties, he made it a success. It had an average circulation of 3,000, the maximum being 4,000.

It came regularly to the reading room of the university, and as soon as it was spread on the sloping desk by the wall a half-dozen or more students would gather in a cluster around it, eager to read Douglass’ editorials; not because he was a fugitive slave, but on account of the intrinsic worth of his utterances.

He had a virile grasp of his subject and wrote in clear, strong, pungent Saxon. He never had a day’s schooling in his life, yet he gripped and delighted college and seminary students.

Pres. Martin B. Anderson of the university warmly befriended him, suggested much to him in conversation and commended to him useful books. …

Called to speak in Detroit, he took a steamboat at Buffalo for that city. He bought a first-class ticket that included his meals. When the dinner gong sounded he took his seat at the table, whereupon some gentlemen, suffering from Negrophobia, indignantly demanded that he should be ejected from the dining-room.

At that time in Rochester, the spirit-mediums, the Fox girls, were notorious for their summoning of departed spirits that supposedly lifted tables and raped on ceilings and walls. Throughout the country there was much talk of the Rochester rapings.

The steward of the steamboat came to Douglass and requested him, for the sake of peace, to leave the table. He replied that he had a first-class ticket, which entitled him to his meals, and that standing on his manifest rights he intended to remain.

“Then,” said the steward, “we shall have to put you out.”

“If you lay a finger on me,” said Douglass, “I’ll give you a practical example of the Rochester rapings.”

Looking on that stalwart frame, the steward quickly concluded that discretion was the better part of valor, and Douglass ate his meals unmolested.

Douglass, by his unusual intellectual ability and whole-hearted devotion to his enslaved race, won the respect and goodwill of the best citizens of Rochester.

In Sibley Hall, one of the buildings of the university, is a bust of Douglass.

When he died in Washington he was buried, according to his known wish, in Rochester’s beautiful cemetery, Mount Hope.

The leading citizens of his adopted city erected a bronze statue of him on a conspicuous site in the heart of Rochester. He came to that city a fugitive from bondage, unknown save by a very few, but in the revolving years won the esteem and admiration of the multitude, of the high and the low, the rich and the poor.

He rose to honor.