Posted by jmullerwashingtonsyndicate in Uncategorized on February 25, 2021

“Moving forward there remains an incredible opportunity to mobilize existing church and faith-based networks and communities within the District and Baltimore metropolitan regions to share a more complete story of Frederick Douglass and the Black Church.”

“Abraham Lincoln, George Washington and Frederick Douglass were men of statecraft and political acumen born during this month of February and their names and anniversaries are kept fresh and green in the thought and memory of the public,” says The Colorado Statesmen, member of the National Negro Press Association

Posted by jmullerwashingtonsyndicate in Uncategorized on September 18, 2020

Posted by jmullerwashingtonsyndicate in Uncategorized on May 13, 2019

In the twilight of a public career spanning more than a half-century, as one of the last old world abolitionist newspapermen breathing, Dr. Frederick Douglass took it upon himself to mentor a quarrelsome younger generation of correspondents and editors of the colored press that vacillated between admiration and antipathy for the former runaway fugitive slave editor.

Of the most pugnacious and confrontational voices within the leading class of Reconstruction journalists of the “colored press” Douglass embraced was native Washingtonian William Calvin Chase, Esq., publisher of the weekly Washington Bee from 1882 until his death in 1921.

Douglass and Chase had countless public disagreements over national and local politics, including the evolution of rival factions in the 1880s over the annual April celebration of Washington City’s Emancipation Day. Some years two parades would occur.

Not part of the modern mythomania advanced by Douglass scholars is the support Douglass directly and indirectly contributed to veterans organizations, relief associations, orphanages, churches, colleges, night schools and the local press, female press and black press during his more than a quarter-century of public life in Washington City.

Don’t believe the dishonorable and shameful lies of the disgraceful scandalmongering David Blight.

Since William Calvin Chase is not among the living to eviscerate Blight’s Pulitzer I will embrace the mandate as a contributing correspondent of Washington City’s modern black press corps.

Get your pamphlets up. Study your lessons.

No mercy nor pardon will be afforded. 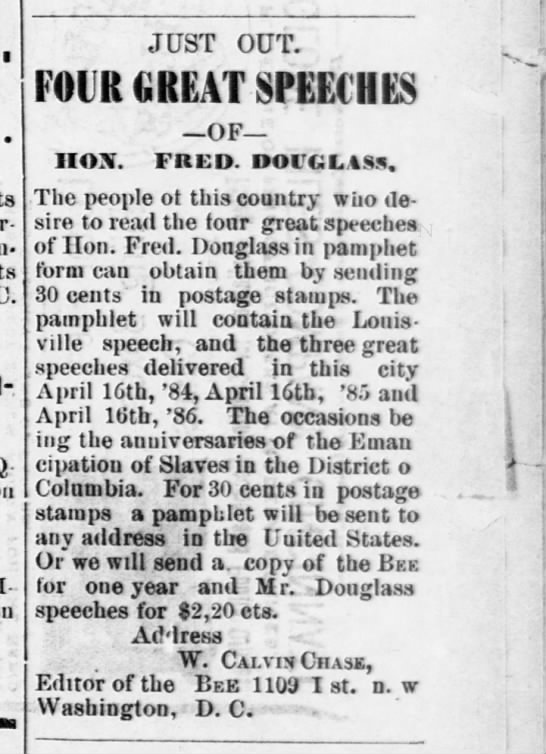 The occasions being the anniversaries of the Emancipation of Slaves in the District of Columbia. For 30 cents in postage stamps a pamphlet will be sent to any address in the United States. Or we will send a copy of the BEE for one year and Mr. Douglass speeches for $2.20 ets.

Posted by jmullerwashingtonsyndicate in Uncategorized on November 2, 2014

My Dear Sir: – I have read with interesting interest the editorials in the National Leader of late and have no hesitation in pronouncing the Leader as one of the most staunch supporters of the Republican party now published in this country. I do hope you will be able to keep your banner on the outer wall permanently. Do not let us clamor for office, but for rights.

Posted by jmullerwashingtonsyndicate in Uncategorized on October 31, 2014

Posted by jmullerwashingtonsyndicate in Uncategorized on March 6, 2013

People are funny and don’t know it. They are always getting upset, excited, hilarious, pompous, chesty or satisfied over something that doesn’t amount to anything of vital importance.

They get all worked up over imaginary insults. Just now they are feigning to be awfully mad because Frederick Douglass ran behind in the race for a place in the Hall of Fame. They are only playing, because many of us are not bothered about having the name of Frederick Douglass perpetuated; if we were, we have a mighty “weedy way” of showing it.

The Frederick Douglass Memorial Home in the capital city of the nation, sits in the middle of a weed patch. It surroundings look more like the wilderness of Judea than like a shrine of perpetuating the sacrificial achievements and idealism of one of the greatest men produced on American soil.

The little brick garden house in which Frederick Douglass wrote his red hot appeals for justice for his people is tumbling down, while thousands of people brag about him before school children once a year, use his name to get applause on high occasions and make the very cobblestones over which the great champion trod, tremble under their feet as they strut in glittering regalia. What a show – what a perfect show!

If people loved and desired to cherish the name of Frederick Douglass, they would make that fourteen acre plot known as “Cedar Hill,” look like Mount Vernon. Washington fought for liberty for the colonists. Douglass fought for freedom for the slaves. One deserves as much honor as the other. The shrine of the one should be as sacred as the shrine of the other to all Americans.

Of course, some people are demanding that the name of Douglass be put in the Hall of Fame. Why? Simply because it would not cost them anything but a lot of talk. The beautification of Cedar Hill would cost them money, labor and time. People are not always hero worshipers  They forget those who suffer and die for them and they vote for those who persecute and despitefully use them. People are funny.

The runners, jumpers, fighters and loafers have made the front pages in all the metropolitan dailies. They have outrun, out-jumped, outfought and outloafed white folks, but those glorious feats do not disturb Americans who think deeply. What would challenge them would be a man who can out-think the best thinkers and outdo he best doers. It is definitely up to the schools to produce some doers.

Posted by jmullerwashingtonsyndicate in Uncategorized on February 13, 2013

Tune in this Saturday, February 16th at 10AM on WRC-NBC4 for a special program on Frederick Douglass in Washington, D.C. hosted by native Washingtonian Danella Sealock.

We salute the 165th birthday of “The North Star,” edited by Frederick Douglass

Posted by jmullerwashingtonsyndicate in Uncategorized on December 6, 2012 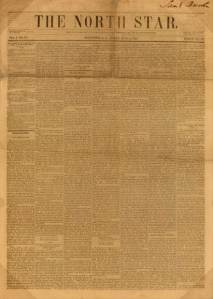 Frederick Douglass is the father of the black press. In 1847, one-hundred and sixty-five years ago today, The North Star was first published.

From Daniel Wallace Culp’s 1902 Twentieth Century Negro Literature: Or, A Cyclopedia of Thought on the Vital Topics Relating to the American Negro:

“This demand for a Negro journal was first met between 1827 and 1834 by unpretentious sheets in and about New York City. But it was not until 1847 that race journalism became a positive factor, when that intrepid spirit, Frederick Douglass, launched “The North Star.” This great man built up a circulation upon two continents and wielded an influence not exceeded by any subsequent race venture. That paper blazed a wide path, and in its path followed enterprise after enterprise, developing the sentiment for liberty and keeping in touch with the newer requirements of the hour.”

Douglass’ own thoughts on the black press captured in Irvine Garland Penn’s 1891 The Afro-American Press and Its Editors:

“I think the course to be pursued by the colored Press is to say less about race and claims to race recognition and more about the principles of justice, liberty, and patriotism. It should say more of what we ought to do for ourselves, and less about what the Government ought to do for us; more in the interest of morality and economy and less in the interest of office-getting; more in commending the faithful and inflexible men who stand up for our rights, and less for the celebration of balls, parties, and brilliant entertainments; more in respect to the duty of the Government to protect and defend the colored man’s rights in the South, and less in puffing individual men for office; less of arrogant assumption for the colored man, and more of appreciation of his disadvantages, in comparison with those of other varieties of men who opportunities have been broader and better than his.”

Posted by jmullerwashingtonsyndicate in Uncategorized on May 19, 2012

The ups and downs, comings and goings, rumors and speculations of Frederick Douglass and his family were widely reported not just in the pages of The Washington Bee, and other black newspapers in the city (as well as every “mainstream” city daily and weekly), but also black press outlets throughout the country from Indianapolis to Huntsville, Alabama to New York City. Invaluable information not widely known about Douglass and his family is captured in print, as well as a perspective that can be unflinchingly laudatory one week and harshly critical the next.

“Lewis H. Douglass, son of Frederick Douglass, has been appointed a Notary Public for the District of Columbia by President Harrison. There are two of three more of the Douglass family to be provided for and then other colored men will stand a chance. Perhaps Fred has some white relatives – on his wife’s side – who wish office.”

The news item directly below…

“There were fifty-six new police appointed in Washington, D.C., July 1, and not withstanding many colored men applied all were rejected. The colored people are about one-third the population of the District and pay taxes on $10,000,000 worth of real estate. The same thing was done recently in both Detroit and Cleveland.”