Posted by jmullerwashingtonsyndicate in Uncategorized on June 17, 2021

Before and after his self-liberation from enslavement, Frederick (Bailey) Douglass was closely connected with the Black Church, Black American clergy and community outreach traditions from petitioning local governments to the organizing of evening Bible study classes and Sabbath schools to multi-day camp meetings.

Escaping enslavement from Baltimore in 1838, Douglass spent a significant part of his early life in the genesis city of Black Catholicism in America. It was in Douglass’ Fell’s Point neighborhood that Sister Mother Mary Lange first started her school in the late 1820s. It was in the Colombian Orator in which Douglass reportedly met “one of Sheridan‘s mighty speeches on the subject of Catholic Emancipation.” While in Ireland in the mid-1840s, Douglass met and shared the stage with Daniel O’Connell, the noted champion of Catholic emancipation in Great Britain.

Working as an activist and reformist across the prevailing faiths and denominations of Western religions for decades, the discussion of Douglass and Catholicism has long evaded scholastic investigation and interpretation.

In the spring of 1894 John Hanson Beadle visited Cedar Hill, the home of Frederick Douglass, in a larger effort to chronicle the complexities and idiosyncrasies of Washington, D.C.’s unique Black communal life.

During Beadle’s interview Douglass shared insights into his relationships with local churches and clergy in Washington. Specifically, Douglass spoke to Beadle about Saint Augustine Catholic Church in D.C., the tradition of Black Catholicism within his native state of Maryland and its impact within Black communities throughout the country.

This interview and quotes from Frederick Douglass on Black Catholicism have not appeared since their original publication more than 100 years ago. All previous known biographical and monographic works of scholarship on Douglass, especially efforts to discuss Douglass with the faith traditions of the Black Church

I found Hon. Frederick Douglass at his beautiful home on the hills east of Anacostia, a site overlooking all the city, nearly all the District and many miles of both branches of the Potomac. It is a typical east Maryland home, with broad halls, well surrounded by trees and showing in every detail of the surroundings a natural love for country life. As we walked about the grounds in front, the little strip called Anacostia was scarcely visible at the foot of the hill. Beyond it the sluggish waters of the eastern branch of the Potomac seemed scarcely moving in the May sunshine. Beyond that the beautiful city stretched northward and westward till it faded away in the timbered heights about Georgetown and on the upper Potomac. Of course Coxey’s army and its related movements formed the first topic of conversation, but in that curious way by which one thing bring on another in conversation till the subject is entirely changed we were soon deep in a discussion of the various religions of mankind.

“I belong,” said Mr. Douglass, “to the Human Catholic church. I usually attend the Methodist church, but for many a year I have not been able to bind down my mind to any of those creeds which as it seems to me, make statements that the ordinary common sense contradicts.

“I have traveled about some and have everywhere seen men doing all sorts of things to get on the good side of God, if happily they might induce him to change his laws for their benefit. So far as my reading goes, I find that men have been doing that through all time, but I am satisfied that the law is invariable. All we can do is to find what it is and obey it.”

“But is there not a great feeling of loss and some anxiety when a man concludes that he is simply the subject of an unchanging law?”

“There is not to me. I am completely at rest on that point. I am within the trade winds of the Almighty. I know that the moral and social and intellectual laws are just as invariable as the physical, and the violation of them will bring what people call punishment – that is the suffering from violated law. I have seen the country thoroughly scourged, and I know it will be scourged again until it does justice, for the law is imperative. But if you want to know about our people’s religious condition I refer you to Dr. Jennifer of Metropolitan, which I usually attend, or Dr. John H. Brooks of the Nineteenth Street Baptist church, for here, as in most places through the South, I believe, the Baptists are most numerous among us.

We have a great many fine people in the Catholic church, and there are probably 10,000 colored Catholics in the District. In fact, Baltimore, Washington and New Orleans contain more colored Catholics than all the other cities in the country.”

“The colored man, you know, is just like any other man when he starts in religion” – this with a short laugh – “he takes the first that is offered him, and all this region, all Maryland, in fact, was Catholic at the start. It is perfectly delightful to go to that St. Augustine Catholic church and see the perfect freedom which prevails between white and colored. It is so in all the Catholic churches of the District, but St. Augustine is the colored people’s pride. The Catholics set a very fine example to the Protestant brethren in that respect.”

The discovery of this archival text, indicating that the Honorable Frederick (Bailey) Douglass was a frequent attendant at my familial place of worship brought about a deluge of memories.

I grew up taking in sermon and the rites of the Eucharist at St Augustine Parish.

Admittedly, however, I have not seen the inside of this legacy temple for a long while now. It was in reading Douglass’ depictions of the community of Black Catholics in D.C. that I’m taken back to Sunday mass with memories of ascending the steps into the church’s foyer where a fountain flows into a stone basin. I’m unable to pull together the image in the design of the statue that takes shapes as the fountain, but I can recall the ritual that my grandmother or mother, or which ever aunt in closest proximity at the time, would anoint my brow with its sacrament; holy water in the sign of the cross.

There’s something about the Black Church that brings about equilibrium, a normalizing of oneself against the opposing forces that await you in America.

St Augustine Parish provided that and more. Entering the doors into the main hall, under the vaulted ceiling, you are flanked by stained glass depictions of a highly melanated Saint Augustine of Hippo and inlaid relief sculptures of apostolic characters adorning afro hairstyles. We worshipped in our likeness.

I don’t know what Frederick Douglass witnessed while taking in sermon in that 19th century church. I doubt that the ornamentation would’ve been that observably Black, but I am of mind to presume that my experience was undoubtedly the product of a uniquely Black attitude of self-reliance and conspicuous religiosity.

VIDEO: Fred Morsell as Frederick Douglass – “The Lesson of the Hour,” Washington, D.C.; 1894

Posted by jmullerwashingtonsyndicate in Uncategorized on February 17, 2021

Ed Note: Many years ago we had dinner with Mr. Fred Morsell and Frank Faragasso discussing the lost history of Douglass. We thank Mr. Morsell for his contributions to the field of Douglass Studies and sustained advocacy. 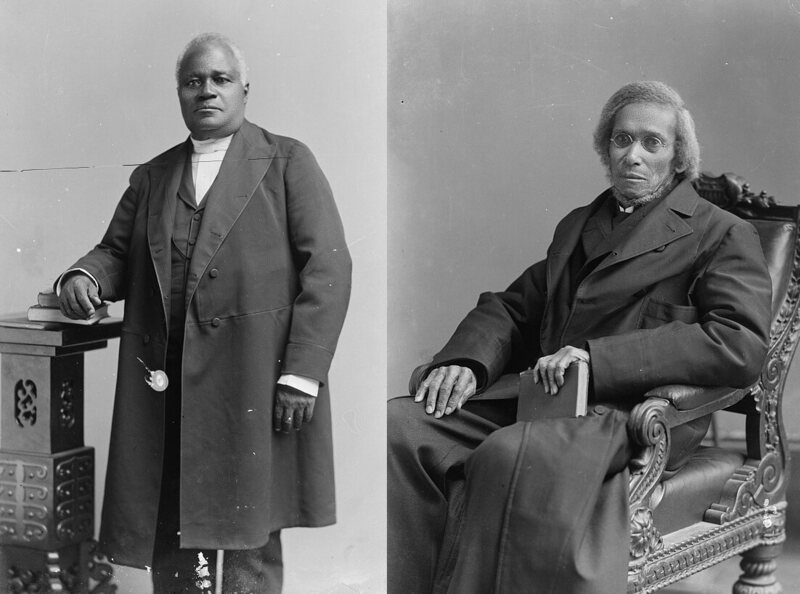 Douglass receives letter from C H J Taylor; “God made us men before either of us joined a political party,”

Posted by jmullerwashingtonsyndicate in Uncategorized on May 16, 2016

When can I have an interview with you, and where? Africa must not be lost and you can save that Continent. “God made us men before either of us joined a political party.”

In strict confidence I am your sincere friend,

Posted by jmullerwashingtonsyndicate in Uncategorized on September 10, 2014

Local historian Jay Roberts will discuss the little known visit Frederick Douglass made to Alexandria on September 24, 1894. Just five months before his death, Douglass – orator, statesmen, influential publisher, social reformer, and champion of civil rights – came to Alexandria. The occasion that brought “the Lion of Anacostia” to Virginia soil was the 31st anniversary of the Emancipation Proclamation. Learn more about this interesting event, sponsored by the Friends of Alexandria Archaeology (FOAA). Light refreshments

Posted by jmullerwashingtonsyndicate in Uncategorized on July 29, 2014