Posted by jmullerwashingtonsyndicate in Uncategorized on April 29, 2021

special h/t to Mr. Matt Redman of the Eastern Shore for discovering Mr. Willyams as a teacher in Baltimore of Mr. George Adams of Centreville, Maryland (Queen Anne’s County) and Mr. Nate Tinner-Williams of Black Catholic Messenger for his work to uplift the history and recognition of Mr. Willyams inside and outside of the Catholic Church.

Posted by jmullerwashingtonsyndicate in Uncategorized on December 12, 2017

A black-and-white photograph of men seated and standing in front of a doorway. They wear coats, many wear ties, and several hold bowler and top-hats. At the bottom right of the photograph is the address, “11th and Pa. Ave. N.W., Washington, D.C.”

Below the photograph is written “Republican Notification Committee / Washington, D.C., / Monday, June 20th 1892.” Frederick Douglass stands at the back, just left of the doorway. 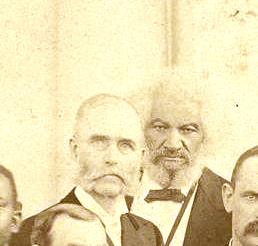 A close-up of the visage of Douglass, the look of a man with serious life lived.

While many in the photo seem to have their attentions focused elsewhere or have their eyes slightly askew, Douglass is looking directly at the camera, dead eye.