A note on steamboats & 1878 visit of United States Marshal of the District of Columbia Frederick (Bailey) Douglass to Mount Vernon, the home of President George Washington

Posted by jmullerwashingtonsyndicate in Uncategorized on September 22, 2020

Within recent weeks we have begun compiling nearly a decade of research notes and recollected thousands of conversations with community members concerning the lost history of Frederick (Bailey) Douglass of Washington City by way of Maryland’s Eastern Shore and George Washington of Virginia, the founding father of America.

One of the most evident examples of the lifelong sentiment Douglass held for Washington are the half-dozen or so visits he made to Mount Vernon, in both private and a public capacity, while living in Washington City following the Civil War.

While serving as United States Marshal of the District of Columbia in the administration of 19th President Rutherford B. Hayes Frederick Douglass joined an assemblage, on the steamer Mary Washington, to Mount Vernon in June 1878 attached to the annual meeting of the council of vice regents of the Mount Vernon Ladies Association.

The MVLA welcomed Governor Frederick Holliday of Virginia and Governor Henry Matthews of West Virginia among other prominent officials, socialites and philanthropists.

A man of modern conveyances, Douglass was a frequent and extensive traveler on steam ships around waterways in and around Washington City, Baltimore, Annapolis, Maryland’s Eastern Shore and tidewater regions of Virginia for the last thirty years of his life. This history has been lost and is unknown today in all existing scholarship on Frederick Douglass.

Traveling up and down, back and forth across the Chesapeake Bay by way of area rivers and tributaries from the Potomac to the Choptank to the Patapsco to the Chester to the Elizabeth to the Wye to the James to the Severn to the Miles, Frederick Douglass was a most conspicuous presence on any ship he boarded.

Although not infrequently the recipient of discrimination on steamships in antebellum America and during voyages across the Atlantic and to the Caribbean, it was widely reported that captains of the Chesapeake steam fleet welcomed Douglass aboard, often inviting him and his company into the captain’s quarters.

According to a section of Tindall’s Standard History of Washington City on local steamboat companies and their specific operations, including the Mount Vernon line:

The steamer W. W. Corcoran commenced making trips to Mount Vernon about 187[8], and continued to do so until re- placed by the Charles Macalester in 1890. She was burned at her dock in September, 1891.

About 1876, and for some years after, the Arrow, a small fast steamer, also took excursions to Mount Vernon.

The Mary Washington, a flat-bottomed steamer, equipped with a centerboard, was operated by E. S. Randall as an excursion boat to White House and Occoquon from about 1873 to 1882. 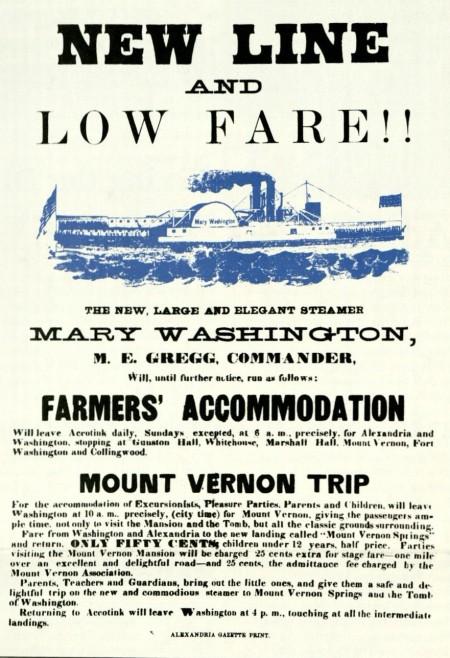 Further background on the Mary Washington and Mount Vernon’s line of steam boats can be gleaned from the indispensable writings of “The Rambler” in the Washington Star.

In 1920 the Rambler turned his rambling attention to steamers; specifically a series of “Rambles” featuring “Famous Old Passenger Craft of Historic Water Route – Phantom Ships as They Pass in the Night – The Mary Washington.”

Although it is perfectly proper to class the Mary Washington with the old Potomac steamboats, she was not so very old even when she passed away. Yet she was a famous boat and nearly every Washingtonian traveled on her. For years she was an excursion carrier to the popular river resorts, and the feature which endears her in the memory of so many Washington men and women is that they danced merrily on her decks. She was a dancing boat. Her decks were broad and smooth and the music furnished by the many bands that served on her was said to be always good

Thousands of people who are following these lines danced on the Mary Washington, which as the years went by came to be affectionately called “the Old Mary.” The Mary was not built to be an excursion steamer. She was built for business, and as the Rambler’s memory serves him, she was built at the instance of the Potomac Fruit Growers’ Association, an organization of Virginians that was quite active in the 70’s.

The Mary was built on Accotink creek, below the village of Accotink, in 1874.

The Rambler finds this paragraph in The Star of Saturday, June 6, 1874: “The new steamboat Martha Washington was launched at Accotink, Va., on Thursday morning and towed up to Alexandria, where she is to receive her engines.”

She seemed to have been named the Martha Washington at her launching, for that name occurs several times in the chronicles, but in a month after she was given to the river she was called the Mary Washington.

Col. Joseph C. McKibbin entered into partnership with Capt. Blake and they bought Marshall Hall, and for some time the Mary Washington was the Mount Vernon and Marshall Hall steamboat.

The Mary Washington was the steamer Douglass took to Mount Vernon in 1878 piloted by Captain Levi Lowell Blake.

(Douglass knew many prominent men who had once been affiliated with steamboats, not the least of the likes of Samuel “Mark Twain” Clemens and P. B. S. Pinchback.)

The Baltimore Sun reported on the 1878 excursion of Frederick Douglass to the home of George Washington, writing:

A very large number of persons accompanied the invited guests to Mt. Vernon, on board the Mary Washington, Capt. L. L. Blake, to whose untiring courtesy very much of the success attending it is owing,

Among the party was Mr. W. W. Corcoran of the board of visitors, after whom the new boat of the association will be named; the Governors of Virginia and West Virginia, with large delegations from their States of ladies and gentlemen; Mr. Rogers, private secretary to President Hayes; Fred. Douglass, Marshal of the District; Judge Chas. B Ball, of Leesburg, Va.; ex-Lieut. Governor Thomas, president of the board of visitors; Col. B. P. Nolan and ex-Congressman Sweat, of Maine.

The council will adjourn to-morrow.

Posted by jmullerwashingtonsyndicate in Uncategorized on May 31, 2014

CLOSING EXERCISES AT THE MINER SCHOOL BUILDING. – This morning the closing exercises of the normal class of the Miner School took place in the Miner building, corner of 17th and Samson streets, in the presence of quite a large audience. Among those present were Rev. Dr. Patton, president of Howard University, Rev. Clay Macauley, Marshal Douglass, G. E. Baker, W. W. Johnson, Mr. Blanchard, Mrs. O’Conner, and Mrs. Winslow of the Minor [sic] School board, Messrs. J. H. Brooks and H. Johnson, of the Board of Public School trustees, Mr. H. R. Miles, and others. The examination in the higher branches of English was conducted by Miss Sarah J. Smith, principal, and it was very interesting and creditable continuing from 9 1/2 o’clock to past noon. Mr. Douglass and others made some complimentary remarks at the close.