Posted by jmullerwashingtonsyndicate in Uncategorized on June 27, 2018

Punching above its weight class, the Talbot Spy is an online news publication covering history, culture and politics of the Shore. Publisher Dave Wheelan recently posted an interview with Richard Tilghman, descendant of Governor Edward Lloyd IV and owner of the Wye House.

In recent years Mr. Tilghman and his family have opened the grounds of Wye House to a team of archaeology students from the University of Maryland, led by Prof. Mark Leone.

For more info on the archaeology project visit HERE.

We’ve recently made contact with Mr. Dave Wheelan of the Talbot Spy and hope to connect sometime in the near future for a tour of Cedar Hill.

Posted by jmullerwashingtonsyndicate in Uncategorized on June 26, 2018

Professor Dale Glenwood Green serves as the Chair of the Maryland Commission on African-American History and Culture.

Posted by jmullerwashingtonsyndicate in Uncategorized on June 22, 2018

The Baltimore American this morning says: – Captain Thomas Auld, so well known as once the owner of Hon. Frederick Douglass – once an Eastern Shore slave boy, now Marshal of the District of Columbia, one of the finest public orators in the United States – died on Sunday last at the residence of his son-in-law, John C. Harper, esq., near St. Michael’s, Talbot county.

Captain Auld was 85 years of age, and had been almost helpless for a long time before he died. He was at one time a merchant in St. Michael’s, was a member of the M.E. Church, was a most excellent man in all the relations of life, and was a kind and indulgent master, when he owned slaves, freeing them all at the early age of 31 years.

In the year 1839, after young Douglass ran away from his slave plantation, Captain Auld received a letter from a gentleman in Canada, asking if he would sell his freedom papers, and offering a liberal sum of money for them. He did not reply to the letter, saying that Douglass would have been free in a few years had he not run away, and now that he has gone, he could stay.

After the passage of the fugitive slave law in 1850, he transferred his supposed right in Douglass to his brother, Mr. Hugh Auld, in Baltimore, who disposed of it to Douglass himself, who was thus relieved of all apprehensions of arrest.

There are numerous factual errors and speculations within this short news item. However, it is a valuable contemporaneous account. 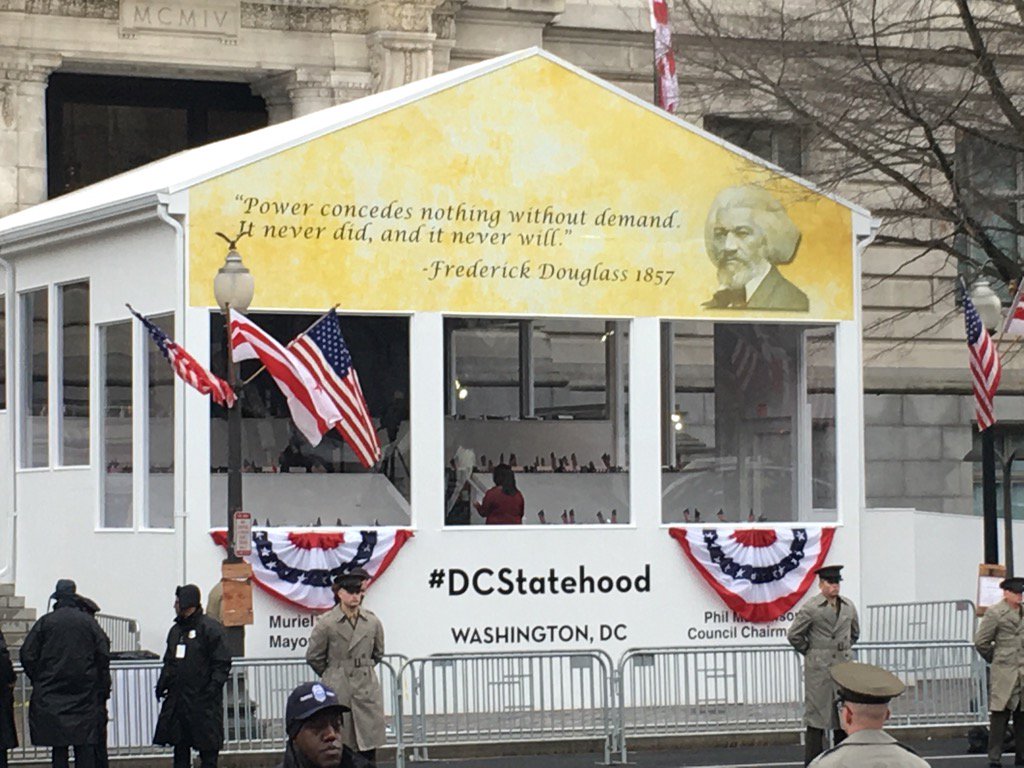 All-day activities planned for July 4, 2018 at Cedar Hill; open for first time in long time for grand view of fireworks on the National Mall

Posted by jmullerwashingtonsyndicate in Uncategorized on June 17, 2018

Frederick Douglass National Historic Site Presents
“What to the slave is the Fourth of July?” 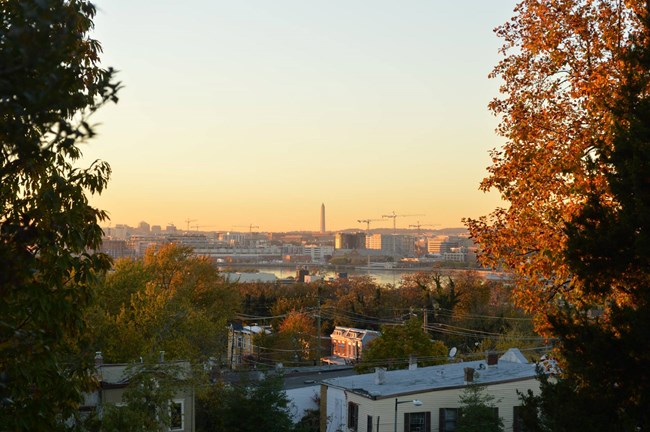 Join the National Park Service on July 4, 2018, for a day of reflection and commemoration as we honor history and celebrate 200 years of the life and legacy of Frederick Douglass, the “Lion of Anacostia.”

Celebrate Independence Day starting at 9 a.m. with special activities at Douglass Cedar Hill estate in historic Anacostia, Washington D.C. Bring your blankets and a picnic to view the fireworks on the National Mall from Cedar Hill at 9:09 p.m.
All activities are FREE and open to the public.

11 a.m. See actor Darius Wallace deliver Douglass famous speech “What to the Slave is the Fourth of July?” on the front porch of the house.

12 p.m. – 6 p.m. Journey on a self guided tour of the house with rangers in different rooms to answer questions. Tours will be on the first floor only.

1 p.m. – 5 p.m. Become a bicentennial Junior Ranger and earn a limited edition badge! Enjoy activities for children and families on the lawn. Croquet, rangers unrolling a replica of the 1877 American flag (1877 was the year Douglass moved to Cedar Hill), storytelling, and living history actors portraying Douglass and his family.

7 p.m. See an encore performance from actor Darius Wallace as he delivers Douglass’s “What to the Slave is the Fourth of July?” speech on the front porch of the house.

8 p.m. – 9 p.m. Enjoy a Fourth of July themed full orchestra concert by D.C. Strings on the front porch of Douglass’s Cedar Hill home. Listen to music as you settle in to watch the fireworks.

9:09 p.m. Witness a grand view of the fireworks on the National Mall from Cedar Hill, just like Douglass would have. Enjoy music from D.C. Strings during the fireworks show.

Posted by jmullerwashingtonsyndicate in Uncategorized on June 17, 2018

Last weekend in Rochester, New York on the ground once the homestead of the Anna & Frederick Douglass family indigenous Douglassonian and polymath Shawn Dunwoody, with helping hands from local students and community volunteers, created the most distinctive and modern Frederick Douglass murals in the known world.

Deviating from traditional form and fashion, Dunwoody has enlivened Dr. Douglass and brought him to life anew with two works unlike any comparable murals.

While in Rochester to connect with family and participate in ceremonies Tarence Bailey visited the 900 block of South Avenue in the Highland Park neighborhood of Rochester. It was here the former Douglass homestead stood.

I am familiar with murals in my areas and have studied Prof. Zoe Trodd’s expansive documentation of Douglass murals internationally. Dunwoody’s works are some of my personal favorites and will be included in the Frederick Douglass Mural exhibit planned for this fall.

Did you know Dr. Frederick Douglass was appointed a “member of the District School Board”? I didn’t. (Rochester Union & Advertiser, August 1874)

Posted by jmullerwashingtonsyndicate in Uncategorized on June 14, 2018

Union and Advertiser, 28 August, 1874. Courtesy Local History and Genealogy Department of the Central Library of Rochester and Monroe County.

During his life Dr. Frederick (Bailey) Douglass lived many lives, visited many places, made many friends and contributed his time and influence to many associations, organizations and causes. There is much of Dr. Douglass and his life untold by any biographers, especially those who are “experts” in speculation, not interpretation or fact.

An area of scholarship untouched by modern scholars, buried deep within the Journal of Negro Education, is Dr. Douglass and Education. It is one of a dozen or so areas of scholarship that has remained at least three time zones beyond the attention of inquisitive and investigatory scholars. No longer.

On a recent trip to Rochester’s Central Library I reviewed microfilm rolls of local newspapers that have yet to be digitized. The tried and true method of cross-checking indexes has stood the test of time.

Brandon Fess and other staff of the Rochester Central library were very helpful in locating a number of news clips containing information never seen before in my six or so years of closely surveying the field of Douglass Studies.

One of the more interesting items discovered was a paragraph from a late August 1874 edition of the Union and Advertiser mentioning the appointment of Dr. Douglass to the DC Board of Education, which at that time maintained a segregated system for “white” students and “colored” students.

I can’t recall coming across this before or a similar item which documents the early involvement and activism of Dr. Douglass within the DC public school system. Many know Charles Douglass was a principal and/or night school instructor in Barry Farm.

I do not believe there is a living scholar, other than Kimberly Springle of the Charles Sumner School Museum and Archives, who has attempted to look under this gigantic boulder of Douglass Studies.

Thanks to a tip from collaborative Douglassonian David Turk of the US Marshal Service I discovered Douglass was appointed, but did not formally accept, a position on the Board of Police Commissioners. I had not known about Douglass and the school board.

Now I know, as do you. There is much research to be done to uplift the history of Dr. Douglass.