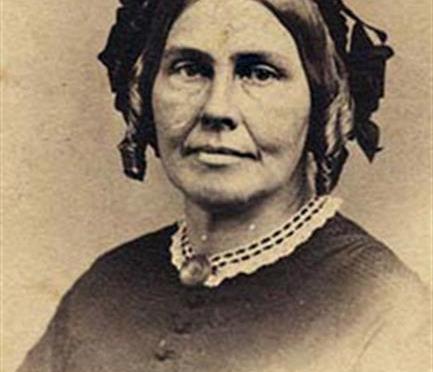 In our continuing series honoring Women’s History Month, I share a brief anecdote of Frederick Douglass in Athens, Greece as told by his friend, educator Lucinda Hinsdale Stone.

Mr. Fearne, of Mississippi, was then the American ambassador at Athens, and Frederick Douglass and wife were also at the Mediterranean Hotel and seated at the table with Captain Dewey and our American party. Mr. Fearne gave a great reception to Doctor Schliemann on his return from Egypt, to which Americans were particularly invited, but from which Mr. and Mrs. Frederick Douglass were excluded on account of his color, though Frederick was a greater man than Mr. Fearne, endowed by God with greater gifts and soul-riches.

But in a few days Dr. Schliemann gave a greater party than our ambassador had done, on his own account, to which he invited Frederick Douglass and his wife as especially honored guests and to which, I recollect, Captain Dewey and his lieutenant were invited to assist Dr. Schliemann in receiving.

Frederick Douglass was no darker in color than Socrates, Pericles, Phidias, and a host of noble Greeks, whose pictures hung in multitudes on the walls of Doctor Schliemann’s palace, and whose statues and busts adorned by dozens its roof – which was a pedestal for the statue of many a noble Greek.

Doctor Schliemann’s house in Athens was called “Ilion Melathron” (the Troy Cottage), though a marble palace rather than a cottage, and they were very hospitable in the use of it for the entertainment of strangers. The roof commands a wonderful view of the Acropolis and many of the classic hills about Athens. He kindly asked us into his library and working-room, the treasures in which would be as much “Greek” to us moderns as Shakespeare makes Ciceros’ speech to the Roman rabble of his day; but they were such as his course of life made necessary and familiar and most valuable to him. Doctor Schliemann has studied, thought, and lived Homer so long that neither the poet nor his characters were myths to him, but daily companions.

The next morning after the Fearne slight I went to the room of Frederick Douglass and wife to ask them to accompany our little party on a drive over to Plato’s garden. He was very pale, for the Fearne slight had pierced him. He was not wholly insensible to such things; but soon, in company with Plato, Socrates, and other great Greeks whom imagination brought around him, he quite forgot the Mississippi minister’s slight, and was himself again.

In our drive around Athens we visited not only Plato’s garden, but the prison where Socrates drank the hemlock. It seemed to me almost odorous that day with the contents of his fatal cup, but the place was wonderfully reviving to Mr. Douglass. We all felt inspired by that drive, and with the contact of so many things reminding us of the great men of past times.

This entry was posted on March 12, 2018, 1:59 pm and is filed under Uncategorized. You can follow any responses to this entry through RSS 2.0. You can leave a response, or trackback from your own site.