Posted by jmullerwashingtonsyndicate in Uncategorized on March 28, 2018

Posted by jmullerwashingtonsyndicate in Uncategorized on March 27, 2018

His whole come up and until his last days Dr. Frederick Douglass ran with visionary radicals of all tribes, nationalities, ethnicities, genders and faiths.

A lesser-known revolutionary, who we feel most appropriate to recognize during Women’s History Month,  is none other than Myrtilla Miner, a local legend in the folklore of Old Washington City.

To keep it funky, Myrtilla Miner was counseled by Dr. Frederick Douglass to pump the brakes on her radical vision to establish a school in Washington City to educate “colored girls” in the early 1850s. Miner disregarded the advice and set up shop in Washington City, protecting her square until her death in 1864.

During his years as a Washingtonian Douglass could never pass Miner’s school without reflecting on its namesake.

While often attending events at the school and donating lecture proceeds, in 1883 Dr. Douglass shared his personal recollections of Miner. 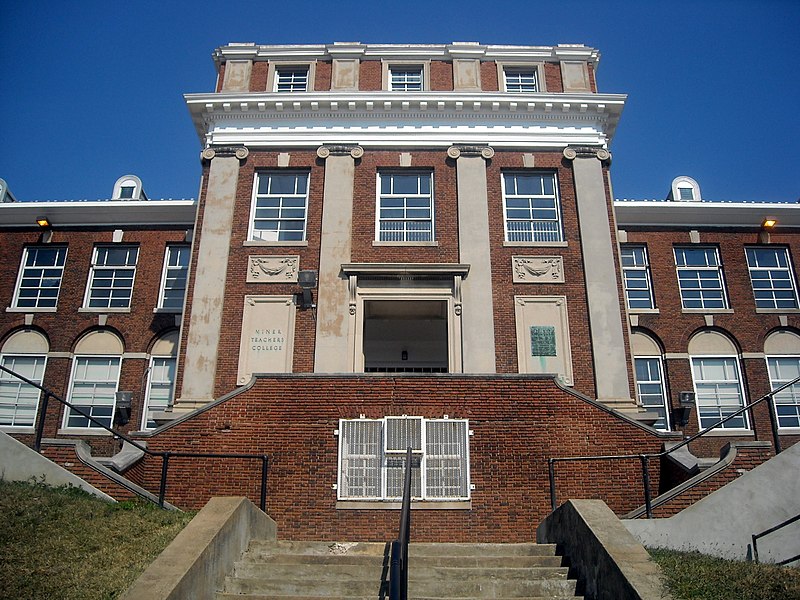 You have often urged me to tell you the little (and it is but little) I remember
of Miss Myrtilla Miner, the founder of what is now the Normal School for Colored Girls in the city of Washington. The task is, in every sense, an agreeable one.

If we owe it to the generations that go before us, and to those which come after us, to make some record of the good deeds we have with in our journey through life, and to perpetuate the memory and example of those who have in a signal manner made themselves serviceable to suffering humanity, we certainly should not forget the brave little woman who first invaded the city of Washington, to establish here a school for the education of a class long despised and neglected.

As I look back to the moral surroundings of the time and place when that school was begun, and the state of public sentiment which then existed in the North as well as in the South; when I remember how low the estimation in which colored people were then held, how little sympathy there was with any effort to dispel their ignorance, diminish their hardships, alleviate their suffering, or soften their misfortunes, I marvel all the more at the thought, the zeal, the faith, and the courage of Myrtilla Miner in daring to be the pioneer of such a movement for education here, in the District of Columbia, the very citadel of slavery, the place most zealously watched and guarded by the slave power, and where humane tendencies were most speedily detected and sternly opposed.

It is now more than thirty years (but such have been the changes wrought that it seems a century) since Miss Miner, in company with Joseph and Phebe Hathaway (brother and sister), called upon me at my printing-office in Rochester, New York, and found me at work, busily mailing my paper, the North Star.

It was my custom to continue my work, no matter who came, and hence I barely looked up to give them welcome, supposing the call to be an ordinary one, perhaps of sympathy with my work, or, more likely, an act of mere curiosity, and continued. I was not long permitted, however, to treat my callers in this unceremonious way. I soon found I was in a presence that demanded my whole attention. A slender, wiry, pale (not over healthy), but singularly animated figure was before me, and startled me with the announcement that she was then on her way to the city of Washington to establish a school for the education of colored girls.

I stopped mailing my paper at once,and gave attention to what was said. I was amazed, and looked to see if the lady was in earnest and meant what she said.

“The doubt in my mind was transient. I saw at a glance that the fire of a real enthusiasm lighted her eyes, and the true martyr spirit flamed in her soul. My feelings were those of mingled joy and sadness.

Here, I thought, is another enterprise, wild, dangerous, desperate, and impracticable, destined only to bring failure and suffering. Yet I was deeply moved with admiration by the heroic purpose of the delicate and fragile person who stood, or rather moved, to and fro before me, for she would not accept a chair.

She seemed too full of her enterprise to think of her own ease, and hence kept in motion all the time she was in my office. Mr. and Miss Hathaway remained silent. Miss Miner and myself did the talking. She advocated the feasibility of her enterprise, and I (timid and faithless) opposed in all earnestness. She said she knew the South; she had lived among slave-holders; she had even taught slaves to read in Mississippi; and she was not afraid of violence in the District of Columbia.

To me, the proposition was reckless, almost to the point of madness. In my fancy, I saw this fragile little woman harassed by the law, insulted in the street, a victim of slave holding malice, and, possibly, beaten down by the mob. The fate of Prudence Crandall in Connecticut and the then recent case of Mrs. Douglass at Norfolk were be fore me; also my own experience in at tempting to teach a Sunday-school in St. Michael’s; and I dreaded the experience which, I feared, awaited Miss Miner.

My argument made no impression upon the heroic spirit before me. Her resolution was taken, and was not to be shaken or changed.

The result, I need not say, has justified her determination.

I never pass by the Miner Normal School for Colored Girls in this city without a feeling of self-reproach that I could have said aught to quench the zeal, shake the faith, and quail the courage of the noble woman by whom it was founded, and whose name it bears.

Posted by jmullerwashingtonsyndicate in Uncategorized on March 27, 2018

Special thanks to Ephrame aka “E” for his leadership as a small business owner in the community, muralist Rebeka Ryvola for her creation of a vernacular mural which captures Frederick Douglass with his local and national friends, local author Dr. Courtney Davis for organizing the picture day, Ranger Nate, Ranger Virginia and the good folks of the Frederick Douglass National Historic Site for their presence and Grahams Alley Douglassonian Tarence Bailey, Sr. of The Hill community of Old Easton, Maryland in Tablot County for coming together to make a memorable day for the neighborhood of Old Anacostia.

Thank you for your kind support!

P.S. Want to extend special thanks to those who supported the creation of the mural with in-kind donations or a financial contribution to cover costs.

Posted by jmullerwashingtonsyndicate in Uncategorized on March 26, 2018

Posted by jmullerwashingtonsyndicate in Uncategorized on March 24, 2018

Image from our friend Jay Roberts and his visit to Highland Beach.

Renowned abolitionist Frederick Douglass (1818-1895) transformed himself from a Maryland slave to an international spokesman for racial justice. Near the end of his life, he planned to retire at a newly built summer cottage in Highland Beach near Annapolis, MD. His legacy and his family’s involvement at Highland Beach created an incorporated African American town that continues to thrive until this day. Come and explore this extraordinary community together with other Fulbright members!

The Birthday Celebration will be held at the Frederick Douglass Home and Museum and Highland Beach Town Hall (about 35 miles from Downtown DC) and run from 1pm to 5pm.

NOTE: A shuttle bus from Union Station to Annapolis will be available for up to 23 participants for an additional $5. It will leave Union Station promptly at 11:30am and return riders there after the event.

For more information and tickets — HERE!

Posted by jmullerwashingtonsyndicate in Uncategorized on March 21, 2018

Posted by jmullerwashingtonsyndicate in Uncategorized on March 20, 2018

In between the work of uplifting Douglassonian Studies and attempting to connect and build community I’ve prioritized addressing the identity theft of Umar Johnson, the pilfering peasant of Pan-Africanism.

Johnson must immediately cease and desist speaking the name of Douglass and Bailey out of his mouth. His lies have been aided by unknowing European Americans of the Eastern Shore who have assisted his treachery by sharing intimate local history, which is intimate Bailey family history.

My come up was along side old school librarians, back of the 70 bus griots of the Riots, Southside street corner historians and veteran editors of the Evening Star. I have standards to maintain with my research and writing. If it can’t be proven or confirmed it is a lie.

Umar Johnson is a lie. Johnson’s alarmingly false claims the “blood that ran in Frederick Douglass veins runs in my veins,” has been used to defraud folks of reportedly hundreds of thousands of dollars.

A close examination of Johnson reveals that this dirty rotten scoundrel stumbled upon a couple history articles at the far reaches of the Internet and has recycled the information anew to fit his lies and distortions. The claims he has repeated I’ve found where he got them from.

Many of the facts Johnson found he has subsequently perverted. For example Frederick (Bailey) Douglass did NOT give Stephen Henry Bailey and his wife Caroline Wilson Bailey a Bible on their 50th wedding anniversary. One of Stephen and Caroline’s sons offered the gift that would become a sacred family heirloom.

Furthermore, in reviewing a video of Johnson’s disgraceful visit to a family cemetery in Denton, Maryland in Caroline County it is clear to the historic detective I was trained to be that something is not right.

It is telling how little the blowhard Johnson knows from the little research he has done, and who really makes video upon videos of bringing students to cemeteries to hear make-believe-lectures?

At the 11:10 minute mark of the video the older European gentleman tells Johnson:

“George had a store in Denton that was burnt down.”

Of course Johnson did NOT know that because he is NOT a Bailey. He is NOT in anyway a kinsman to Frederick (Bailey) Douglass, Stephen Henry Bailey or George Washington Bailey. All lies.

My mother has a family scroll. My father knows from where in Germany his folks came. I was told the oral history of my family since I was a little kid. I was raised to know it.

In conversations with authentic members of the Bailey Tribe the oral histories contained within the family pre-date the formation of this country.

As zealous and manic as Johnson is in holding steadfast in defense of his LIES that he is a kinsman and fake-descendant of Stephen Henry Bailey, the fact he does NOT know the oral tradition of his falsely self-clamed family and has to be told by someone outside of his family is very revealing.

This is circumstantial yet consequential evidence of the mighty fraud Johnson has perpetuated. Family historians understand what rings true and what does not.

I ask for your patience and indulgence as I gather all of my research and present my case to refute every single one of the LIES the pilfering peasant of Pan-Africanism has ever uttered about Dr. Douglass and his family and members of the Bailey Tribe.

Also, I just spoke to some extended family of my Uncle G’s wive’s family. Come to find out I am distant descendant — not by blood but way of my father’s younger brother’s wife — of one of the poor Irish kids in Fells Point whom Frederick Bailey enlisted as an impromptu back alley teacher. See, anybody can just make anything up.