Posted by jmullerwashingtonsyndicate in Uncategorized on February 4, 2018

There is a small collective of Hall of Fame of Douglassonian biographers — Holland, Gregory, Quarles, Foner, Blassingame and Preston.

Absent from this list is the delusional William McFeely and his disturbing 1991 biography, Frederick Douglass.

As attention in Douglass swells during the Bicentennial month of his birth the record must be set straight: William McFeely’s biography of Douglass is straight garbage.

Look no further than the New York Times review from February 1991:

More than their predecessors, modern American biographers tend to probe the personal lives of their subjects by deeper research into their backgrounds, often retracing their footsteps and bringing new information to the surface. This is what Mr. McFeely does so well here as he tracks Douglass all over the country and abroad. The author, a professor of history at the University of Georgia, followed a similar course in his notable biography of Ulysses S. Grant. While offering a good deal of psychological speculation about Douglass, his interpretations seem rooted in solid evidence.

Inferences and speculations fill nearly every page, paragraph and sentence in the book.

A recipient of the Pulitzer-Prize for his 1982 biography, Grant: A Biography, and author of one of the few works on Oliver Otis Howard, an outgrowth of his dissertation, McFeely seems, at times, disinterested in his subject and at times takes a tone of disdain. Even when defending ambiguous conventional criticism of Douglass, such as Douglass distanced himself from his racial identity at turns during his lifetime, McFeely asserts a perceived authority that comes from cliched generalities not facts.

In late 2011 when I embarked on the research process for Frederick Douglass in Washington, D.C. McFeely’s work was the first I picked up. I subsequently read Quarles, whose work I was familiar with from high school self-study. It was a couple months later I found, with the help of bookseller buddies, Philip Foner’s biography.

In comparison to the full biographical works of Quarles and Foner, McFeely’s work is shoddy scholarship, to be polite about it.

Focusing on Douglass’ Washington years from 1870 until his death I closely read McFeely’s speculative psychology in chapters “Uniontown,” “Cedar Hill” and others. What little actual factual information about Douglass and local Washington McFeely attempts to advance I quickly broke down, such as McFeely’s claim the New Era was printed across the old Eastern Branch Bridge, in what today is Ward 8.

McFeely does detail Douglass’ involvement with the Freedmen’s Savings and Trust Company, the 1883 National Convention of Colored Men and his minister-ship to Haiti.

However, overall McFeely wastes many a words on idle speculation. For example, on the first page McFeely uses not a Douglass letter, writing or memory but his own prose to describe the flora and fauna of the Tuckahoe.

“Rabbits and deer invaded the fields from the woods, and turtles sunned on logs in the Tuckahoe, into which the brook fed. The birds, in rich confusion, made the sounds of morning; one of the great sights came at migrating time, when ducks in flocks settled on the marsh-bounded water below the mill dam. This was Frederick’s outdoors home; when he went indoors, his shelter was a cabin built with timbers cut from the woods, sheathed with the slabs of bark left when they were squared, and caulked and floored with clay from the brook.”

I close my case with a C-SPAN video of McFeely from 1999.

Introduced by our good friend and Douglassonian Frank Faragasso, McFeely devotes half of his time to discussing the current public policy issue du jour. While discussion of public policy is at times interesting and provocative, you are there to talk about Douglass, not some other stuff.

McFeely would later author a book detailing his involvement with death penalty reform efforts. Born in 1930, McFeely would now be 88 years old or thereabout.

We won’t wish him ill but his book is sickening. Its few achievements are overwhelmed by its many shortcomings and speculations.

Future Douglass biographers or Douglass monograph writers need to look towards the work of Leigh Fought, Paul & Stephen Kendrick and the Hall of Fame Douglassonian writers.

[As a note, textual analysis and textual comparison is not Douglassoniana scholarship I consider serious. This book is scholarship. This book is not. And along with David Blight, McFeely and Ira Berlin, FD Studies have been hijacked for the last 30 years by White Man Lies.]

Posted by jmullerwashingtonsyndicate in Uncategorized on February 4, 2018 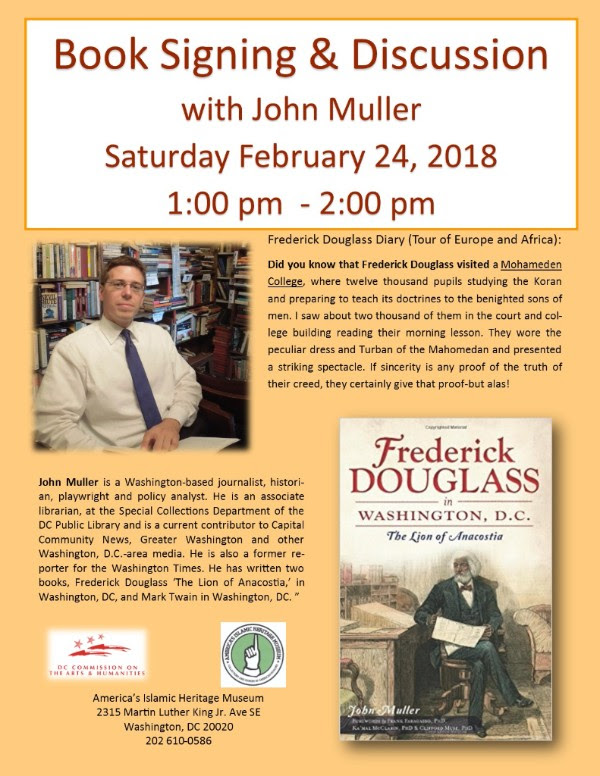 Many an evening after reporting on a community meeting, development presentation or coming from the Douglass House I have passed by America’s Islamic Heritage Museum.

Often Mr. and Mrs. Muhammad have seen me and invited me to come inside to share in breaking bread for an event or celebration held at their wonderful museum and community center.

Mr. Amir Muhammad, a true Douglassonian and Islamic Scholar of the first order, has been a friend for many years. When my dear friend and fellow street reporter William Alston-El was struggling and I did not where or who to turn to for counsel Mr. Muhammad was kind enough to let me bend his ear. William is now doing much better and in the care of his family.

Mr. Muhammad and his wife are respected scholars and community leaders not just in Anacostia but throughout the Islamic world. They have worked with the State Department and institutions of higher education for many years. Local children are fed after-school meals at the museum.

If you visit the museum often or you have never been before please come through to this presentation and/or consider supporting the museum.