Posted by jmullerwashingtonsyndicate in Uncategorized on November 27, 2017

Throughout the greater countryside and the greater DC metropolitan area there are Douglass statues. Throughout Ward 8 there are a number of murals and depictions of Mr. Frederick Douglass. Some are well done, while some could use a little touch-up work.

The newest Douglass-related mural doesn’t depict the visage of the Lion of Anacostia, instead it depicts local children planting and watering a sapling in the front lawn of Cedar Hill, the home of Douglass from the fall of 1877 until his death in February 1895.

On the bottom reads, “Once you learn to read, you will forever be free.” – Frederick Douglass

This mural is part of a larger and ongoing renovation and beautification of the school famous and revered among the streets and inhabitants of Old Anacostia.

The mural was completed by Joe Pagac from Tucson, Arizona. Ketcham ES entered into a contest on Twitter and was selected for the mural from the DC Mural Arts Program –> MuralsDC/DPW #Nominatemywall campaign 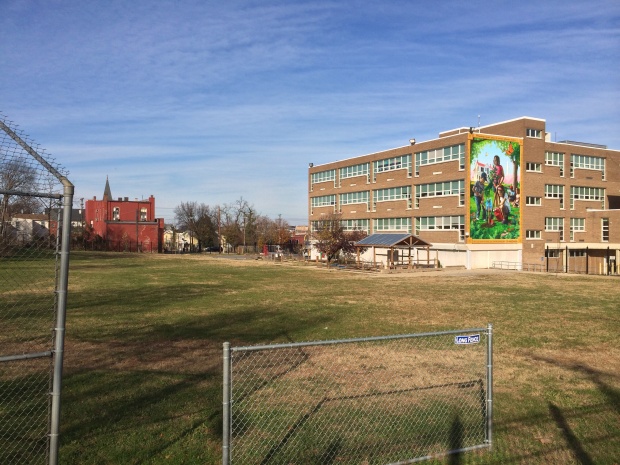 Posted by jmullerwashingtonsyndicate in Uncategorized on November 22, 2017

Posted by jmullerwashingtonsyndicate in Uncategorized on November 21, 2017

DC Prep has generously donated space, from 9am – 4pm, to convene a gathering of local and regional Douglassonians in preparation for the Frederick Douglass Bicentennial, which is planned to take place across multiple countries, states, cities and towns throughout 2018.

Despite the recent passing of legislation to create an official government commission very little has been organized and there has been no gathering of Douglassonians — open to the community and general public — in Washington, D.C. in nearly two decades.

The last efforts were led by Dr. Frank Fargasso and Howard University.

Time is running out for Mr. Douglass to get the organized recognition and community collaboration he so righteously and properly deserves.

Funds will be used to support the good folks who are taking their time to present and share the expertise with the the community, food and drink, printing costs and other incidentals.

The figure of $1818 represents the year of the birth of one of the greatest native sons of the United States of America, Frederick Augustus Washington Bailey.

All funds will be used to support the FREE community conference for Anacostians and Douglassonians worldwide.

Posted by jmullerwashingtonsyndicate in Uncategorized on November 21, 2017

In preparation for a planned one-year sojourn through the Old World Frederick Douglass placed an advertisement in the Evening Star in March 1886 seeking a renter for his Cedar Hill estate.

The ad in full:

What Will Happen With The Frederick Douglass Bicentennial?

Posted by jmullerwashingtonsyndicate in Uncategorized on November 19, 2017

With less than three months until the 200th birthday in February 2018 of Frederick Douglass, one of the most consequential and important native sons in the history of our country, the Bicentennial Commission tasked with planning, developing, and carrying out programs and activities to honor Douglass is not even formed.

After introducing resolutions in previous legislative sessions, Congresswomen Eleanor Holmes Norton (D – District of Columbia) introduced H.R. 2989 in June 2017 to the House Committee on Oversight and Government Reform. Following an amendment process, on October 18, 2017 the resolution passed the Senate and became law on November 2, 2017, signed by President Trump.

Late last week Congresswoman Nancy Pelosi (D – California) appointed Representative Norton and Kenneth Morris, a Douglass descendant, to the Commission. In total the Commission is to be composed of 16 members. The remaining 14 members will be appointed as follows:

What Will This Amount To?

The Commission appears tantamount to a conventional paper tiger with ceremonial names. While some may feel a stately Commission honors the memory of the abolitionist, journalist and reformist, Frederick Douglass deserves better. Much better. It is too late to do better.

The Lincoln Bicentennial Commission was formed in 2000. Nine years before Lincoln’s Bicentennial was celebrated in 2009.

While Frederick Douglass touches many cities, counties, states and countries, there is no existing coordination between Douglass-related heritage sites, landmarks and museums, scholars, academics and authors, educators, re-enactors and interpretive tour guides and institutions that promote and preserve the legacy of Douglass.

In recent years a number of statues of Douglass have been erected and placed in prominent places such as the Capitol Visitor Center’s Emancipation Hall, the campus of the University of Maryland, National Harbor, Easton, Maryland and a college campus in West Chester, Pennsylvania.

The first Douglass statue was erected in 1899 in Rochester, New York. It has been moved from its original location and by some accounts has been forgotten in the city where Douglass launched the influential North Star in 1847. In the early 1990s the city added another Douglass likeness in a public park having tea with Susan B. Anthony. There are multiple statues of Douglass in New York City, including one just outside of the New York Historical Society.

Despite the many statues and Douglass’ connection to the Library of Congress, where the majority of his personal papers are archived, Howard University, where he served on the Board of Trustees from 1871 until his death, Yale University, which began the Frederick Douglass Papers Project in the early 1970s and the Department of Interior which has had administrative jurisdiction over the National Park Service’s Frederick Douglass National Historic Site since the Kennedy Administration, the upcoming Bicentennial has been orphaned.

The politicians have issued their press releases with laudatory quotes about the Bicentennial Commission. But who will now do the bare-knuckle work required to plan, organize and execute a robust schedule of public programs including lectures, tours, essay and oratorical contests across three states and the District of Columbia, as well as attempt to tackle the amazing deficit of scholarship and scholarly infrastructure?

Is there an individual, group of individuals or institution that is poised and capable to take the lead with so little time before the Bicentennial calendar turns?

Frederick Douglass was born a slave, a non-citizen. By the time of his death he had advised Presidents Lincoln, Johnson, Grant, Hayes, Garfield, Arthur, Cleveland and Harrison.

Unfortunately, President Trump cannot appoint Mr. Douglass to his own Bicentennial Commission, despite comments earlier this year by the President which caused many to perceive he did not know Douglass was no longer with us.

In the void of a functioning Douglass Bicentennial there are two things which will undoubtedly keep him in the public consciousness throughout 2018:

The United States Mint placing Douglass and Cedar Hill on a quarter earlier this year, and Will Ferrell portraying Abraham Lincoln and Don Cheadle portraying Frederick Douglass in an episode of Drunk History that has been viewed nearly 4 and a half million times on YouTube.

Although Douglass did not imbibe and was an active temperance leader this is what his memory has been reduced to: Drunk History.

Author, Frederick Douglass in Washington, D.C.: The Lion of Anacostia (The History Press, 2012)

Posted by jmullerwashingtonsyndicate in Uncategorized on November 18, 2017 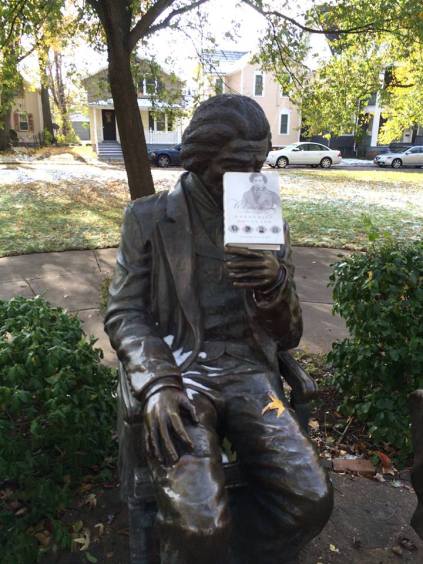 Historian and professor of American History at Le Moyne College, Leigh Fought, paints an alternative portrait of abolitionist and social reformer Frederick Douglass by examining the lives of the women around him. In this latest work, Fought sheds light on Douglass’s relationships to his mother, grandmother, slave mistresses, wives Anna Murray and Helen Pitts, and many other women who nurtured, challenged, and united with him in shared struggles for emancipation, the right to vote, and equality.

BHS Members: to reserve tickets at the member price, click on “Tickets” and enter your Member ID on the following page after clicking on “Enter Promotional Code.”

Founded in 1863, Brooklyn Historical Society (BHS) is a library, museum, and urban education center dedicated to the people of Brooklyn, providing opportunities for civic dialogue and thoughtful engagement.

Posted by jmullerwashingtonsyndicate in Uncategorized on November 17, 2017

WASHINGTON, D.C.—The office of Congresswoman Eleanor Holmes Norton (D-DC) today said that Democratic Leader Nancy Pelosi (D-CA) has appointed Norton to serve on the Frederick Douglass Bicentennial Commission, which was established by Norton’s bill (Public Law 115-77).  The commission will plan, develop and carry out programs and activities to honor and celebrate the life of Frederick Douglass, the country’s greatest slavery abolitionist, during the bicentennial anniversary of his birth, in 2018.  Douglass’ home at Cedar Hill in Southeast Washington, D.C. is an official National Historic Site, which attracts thousands of visitors annually.  Leader Pelosi also appointed Kenneth Morris, Jr., Douglass’ great-great-great grandson, to the commission.  Norton’s bill specified that the House Minority Leader would appoint two members of the commission, at least one of whom must be a Member of the House.

“I thank Leader Pelosi for selecting me to serve on the Frederick Douglass Bicentennial Commission,” Norton said.  “I am particularly pleased that she also has appointed Kenneth Morris, Jr., the great-great-great grandson of Frederick Douglass, whose knowledge of Douglass’ legacy is unequaled.  I look forward to the bipartisan work of planning a fitting celebration in honor of one of the greatest Americans in history, including events here in the District of Columbia, which Douglass called home for most of his adult life.”

The commission’s other 14 members will be appointed as follows:

Baltimore: A Day with Frederick Douglass and Lou Fields (November 18, 2017)

Posted by jmullerwashingtonsyndicate in Uncategorized on November 17, 2017

Photo by John Muller. All rights reserved and enforced.

To kick off the Baltimore 2018 Year of Douglass, his bicentennial birthday celebration and the 180th anniversary of his escape, the African American Tourism Council is seeking your support and participation in “A Day with Frederick Douglass” at the Frederick Douglass-Isaac Myers Maritime Museum & Park.

Mayor Catherine E. Pugh has confirmed her attendance. The program will start at 10:00am and conclude at 2:00pm.

At the conclusion of the walking tour participants and the general public are invited to a Discussion with Frederick Douglass at the Douglass Myers Museum at 1417 Thames Street, Baltimore, MD.

Frederick Douglass books will be on sale.

During the discussion Frederick Douglass will be portrayed by Mr. Nathan Richardson, artist, poet, historian and interpreter.

All that sounds good is not good upon a little investigation & research. Sanctioned by family that Lou Fields is done.

Frederick Douglass: “Of my father I know nothing.” The “Miseduction” & dumbing down of Douglass continues by Baltimore’s Lou Fields who claims to know identity of Douglass’ father. –>

Posted by jmullerwashingtonsyndicate in Uncategorized on November 14, 2017 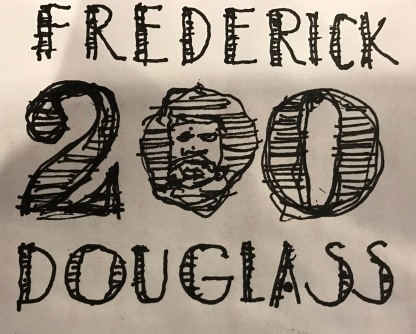 Raymond Weeden of DC Prep has generously donated space, from 9am – 4pm, to convene a gathering of local and regional Douglassonians in preparation for Frederick Douglass 200, or Frederick Douglass Bicentennial, which is planned to take place across multiple countries, states, cities and towns throughout 2018.

Despite the recent passing of legislation to create an official government commission very little has been organized and there has been no gathering of Douglassonians — open to the community and general public — in Washington, D.C. in nearly two decades. The last efforts were led by Dr. Frank Fargasso and Howard University.

Time is running out for Mr. Douglass to get the organized recognition and community collaboration he so righteously and properly deserves.

Although we’re working on a tight window the organization of the event is simple and straight-forward.

11:50 am – 12:45 pm – lunch — vendor tables to distribute information and/or promote materials on your organization and/or FD

What I am asking of you:

1. Are you interested in speaking / presenting? What will you speak / present on?

2. Will you be representing yourself or your organization? Or both?

4. Which panel or time slot do you prefer?

* At this time there are no funds for stipends or honorariums available. All efforts and labor is pro-bono at this time.*

Some of you may know me from when I organized a theatre group and staged a play about the 70 bus many, many moons ago. Some may know from events I’ve organized at the library or in the community. Others may know of my reporting and work on Douglass in Anacostia. Others may have no idea who I am but if you’re cool with Douglass, we are cool. We can get this done but it will take “we” who care about Douglass and his life and legacy. Time is quickly running out.