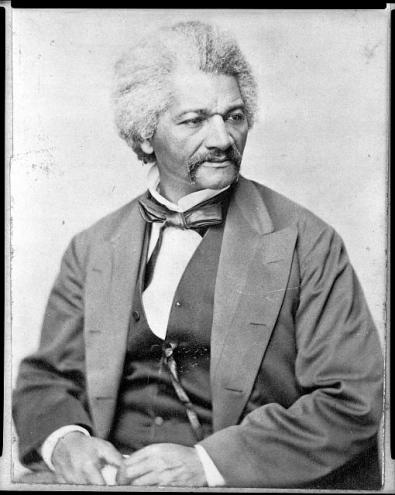 “A marked characteristic of Frederick Douglass is his love for music. When but a little fellow he would go up to “the great house” to hear the violin play for the dancers. The fiddler, he says, did not play common airs, but the best music, and while he listened the little yellow boy under the window forgot everything else. Love of music drew him to the Methodist meetings, for the singing was music to him, and he joined in with a will. It was at these meetings he began to speak in public, and discovered how well he could talk and the pleasure in being praised for the same. When a Sunday school exhibition by the free negroes was in prospect he found a chance for exercising his budding oratory. He bought a “speaker” with the “tips” his master had given him for blacking boots, and selected a piece with a plenty of big words – a college oration was wherein expounded what man can by imagination. The words were Greek to him, but he particularly liked rolling out: “He can soar aloft where stars glitter on the mantle of light and a more effulgent sun lights up the blushes or morning.”

Talking with Frederick Douglass one is sometimes inclined to think that, interesting as his autobiography is, it does not contain many of the most interesting experiences of his life, those he once thought, perhaps, insignificant to the public. On his wife’s piano at Cedar Hill you may see the very same music book that he slipped into his bundle when he skipped out of Maryland. It is worth something to see him standing with his violin singing with Mrs. Douglass those old “Seraph” hymns. If you had breakfast with him on a Sunday morning he will pass you with his own hand the Maryland biscuit, and is it not worth knowing that are just like the biscuits “Miss Lucretia” used to give him when half starved he sang under her dining room window? “I used to wish I could have my fill of them, and now I mean to have, you see?”

There was living in Washington a year of so ago an old colored man, who was a fellow slave with “Fred,” as he still calls him. His wife was the daughter of the old fiddler of “the great house.” Hearing them talk together – the recorder of the District of Columbia, and the tender of a furnace in the Capitol – laughing merrily over reminiscences of the plantation, was a unique experience.

“No, I don’t remember anything special that Fred used to do in them days,” said the old man in reply to probing inquiry, “only he jes wouldn’t be put upon and wanted to boss everything.”

* This story was re-printed in papers throughout the country. *

Jane Marsh Parker was friends with the Douglasses for decades and contributed articles to leading magazines of the late 19th century and early 20th century. She wrote novels as well as histories, including an 1884 book about the history of Rochester, New York which features Frederick Douglass.

This entry was posted on July 7, 2014, 9:34 pm and is filed under Uncategorized. You can follow any responses to this entry through RSS 2.0. You can leave a response, or trackback from your own site.