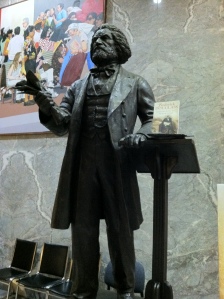 WASHINGTON, DC – Congresswoman Eleanor Holmes Norton (D-DC) thanked her colleagues in the Senate for passing a resolution yesterday authorizing the use of Emancipation Hall on Wednesday, June 19, 2013, to unveil the District of Columbia’s Frederick Douglass statue, marking the first time that the District, like the states, will have its own statue in the Capitol.  The resolution is expected on the House floor soon but does not need to be signed into law in order to take effect.  The Congresswoman particularly expressed her gratitude to Senator Charles Schumer (D-NY), chairman of the Senate Rules and Administration Committee, for sponsoring the bill and to Senate Majority Whip Dick Durbin (D-IL), who jumpstarted the effort to move the statue into the Capitol as chairman of the Appropriations Subcommittee on Financial Services and General Government, which has jurisdiction over D.C., when the subcommittee’s s fiscal year 2013 appropriations bill, approved by the full committee but not considered on the Senate floor, included a provision authorizing the move of the statue into Capitol.  Schumer then sponsored a stand-alone bill authorizing the move and the House companion to Schumer’s bill, sponsored by former Rep. Dan Lungren (R-CA), then-chairman of the Committee on House Administration, and co-sponsored by Norton, was signed into law by President Obama on September 20, 2012.

“Our country has always recognized our residents as American citizens when the country goes to war and in the obligation to pay federal income taxes,” Norton said.  “Because D.C. residents have met every obligation of citizenship, they have tried for years to be represented in the Capitol with a statue, donated by them, like each of the 50 states.  Today, with vital assistance from Senators Schumer and Durbin, the District is close to realizing this long sought symbol of their American citizenship.  Frederick Douglass is one of the great international icons of human rights, but D.C. residents chose his statue to represent our city in the Capitol because of the boundless energy he dedicated to the right of D.C. residents to democratic self-government and congressional representation.  Our residents, who have no elected senators of their own, are deeply indebted to Senators Schumer and Durbin for their generous efforts.”

The Douglass statue will be only the fourth statue or bust in the Capitol that honors an African American.

This entry was posted on May 17, 2013, 4:59 pm and is filed under Uncategorized. You can follow any responses to this entry through RSS 2.0. You can leave a response, or trackback from your own site.