Posted by jmullerwashingtonsyndicate in Uncategorized on July 28, 2012

In nearly all I have read on Frederick Douglass and his second marriage, biographers use the same repeated source — The Pittsburgh Weekly News and a paper from Franklin County, Virginia — as a near monolith to represent the public and the press’ reaction. I find this lazy, amateurish, and unfitting of true scholarship. There are only a handful of true biographies (for adult readers) on Douglass, and yet, even with he best of these works, these two sources are repeated and regurgitated.

Why not look at newspapers in Washington, DC? In 1884 there were a couple of papers in the city…including The Washington Grit edited by black nationalist John Edward Bruce, who had contributed to The New National Era. 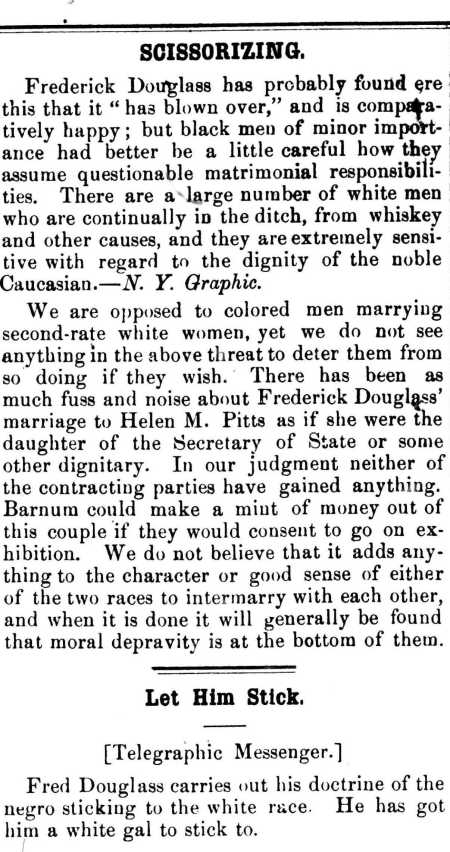 On February 16, 1884 an editorial ran reading, “We are opposed to colored men marrying second-rate white women, yet we do not see anything in the above threat to deter them from so doing if they wish. There has been as much fuss and noise about Frederick Douglass’ marriage to Helen M. Pits as if she were the daughter of the Secretary of State or some other dignitary. In our judgement neither of the contracting parties have gained anything. [Phineas Taylor] Barnum could make a mint of money out of this couple if they would consent to go on exhibition. We do not believe that it adds anything to the character of good sense of either of the two races to intermary with each other, and when it is done it will generally be found that moral depravity is at the bottom of them.”

To note, Helen Pitts, a college educated women in 19th century America, was white, but she was not “second-rate.”