Arson attempt on the offices of Frederick Douglass’ The New Era? [Baltimore Sun, May 1871]

On Thursday January 13, 1870 The New Era made its appearance in Washington, DC with the backing of Frederick Douglass, a newspaperman lest we forget.

The paper’s name was derived from the abolitionist newspaper The National Era which was published weekly in Washington from 1847 to 1860 under the editorship of Gamaliel Bailey and John Greenleaf Whittier. From 1851 to 1852 it published Uncle Tom’s Cabin in serial form. During the Pearl Affair, the largest planned escape of slaves in American history, in 1848 a mob almost destroyed their offices.

Plans to start up a “colored paper” in Washington, DC were in the works in the immediate years after the Civil War with folks like George T. Downing urging Frederick Douglass to take a leading role. Douglass, after running three previous papers, has been described as the reluctant editor. This is true.

A couple days after The New Era paper appeared on the city’s streets, the Baltimore Sun‘s “Washington Letter” ran a paragraph acknowledging the launch of the “colored people’s paper.”

“The New Era made its appearance this morning. As heretofore state, it is to be the organ of the colored people of the country. The editor is Rev. Sella Martin; corresponding editor Frederick Douglass. The first issue contains a card from Douglas, stating that pressure of his business prevented him from sending an editorial this week. Three white and one colored printer perform the work of composition.” [The colored printer being Fred, Jr.]

By the end of the year the paper had problems. Promises were made to Frederick Douglass that were apparently not kept and Douglass ended up going all in, anteing up his hard-earned dollars to ensure the paper’s survival.

In February 1871 the District of Columbia Organic Act become law, consolidating the governments of the city, Georgetown, and Washington County. As a Republican man in what was then a Republican city, Douglass was considered a leading candidate for the position of non-voting Delegate. Douglass wasn’t sitting on his hands.

Before moving to Washington Douglass was widely known on both sides of the Atlantic for his outspokenness on the page and lecture stage. However influential in political and literacy circles, not everyone agreed with Douglass’ advocacy and the positions his paper, The New Era / New National Era took in demanding equal rights under the law for freedmen and women. Douglass, a man who came up in the streets of 1830s Jacksonian Baltimore but came of age in Rochester, New York, would often remind folks, “Washington was an old slave city.”

That said, I find Douglass involvement with the New Era/New National Era/New National Era-Citizen another overlooked dynamic of his time in Washington, DC. Foner, Quarles, and Deidrich give it a fair shake. McFeely’s gross negligence and slothful treatment of the paper is downright blasphemous. (About a decade ago there was a panel at the DC Historical Studies Conference on Douglass and his DC paper but at the time I was still a teenager on my own come up so I missed it. I have been unsuccessful in contacting one of the panel’s participants to find out what was said and presented.) 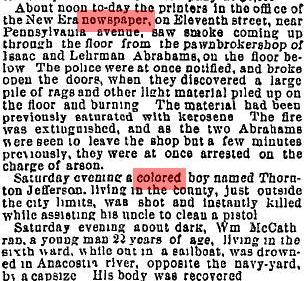 In all the treatments of Douglass and his DC paper in books, academic journals, and other published material looking backwards I’ve never come across what looks to be an arson attempt on the paper’s offices.

“About noon to-day the printers in the office of the New Era newspaper, on Eleventh street, near Pennsylvania avenue, saw smoke coming up through the floor from the pawnbrokership of Issac and Lehrman Abrahams, on the floor below. The police were at one notified, and broke open the doors, when the discovered a large pile of rags and other light material piled up on the floor and burning. The material has been previously saturated with kerosene. The fire was extinguished, and as the two Abrahams were seen to leave the shop a few minutes previously, they were at once arrested on the charge of arson.”

Whew. OK. What does this say? Were the Abrahams trying to arson their own business to collect insurance, trying to burn down the offices of the New Era, or just crazy pyromaniacs?

A quick review of my own files of the the May 25th, June 1, and June 8th editions of the New Era didn’t reveal any mention of this failed arson attempt. But that doesn’t mean it’s not there and I overlooked it. I will do another review soon and will see what I can find in the Evening Star from May 1871 down at the Washingtoniana Division.

All in all, this might be not be nefarious but as they say where there’s smoke there’s fire.

This entry was posted on June 17, 2012, 8:47 pm and is filed under Uncategorized. You can follow any responses to this entry through RSS 2.0. You can leave a response, or trackback from your own site.