If Anna Murray Douglass was buried in DC’s Graceland Cemetery then how and why did she end up in Mount Hope Cemetery in Rochester? 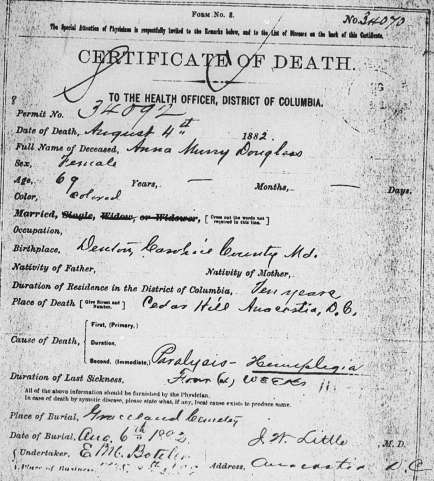 In life Anna Murray Douglass, the wife of Frederick Douglass for 44 years and mother to their five children, is largely a mystery to historians. In death, she’s still a mystery.

According to her Certificate of Death from August 1882, the 69-year old Anna Murray Douglass, originally of Denton, in Caroline County, Maryland died August 4th of “Paralysis – Hemiplegia.” By care of an undertaker from Anacostia, she he was buried in Graceland Cemetery on August 6th, 1882.

According to the Baltimore Sun‘s “Washington Letter” from August 8, 1882, “The funeral of Mrs. Frederick Douglass yesterday was attended by a large concourse of both white and colored, on foot and in carriages. The funeral procession, a long one, carried the remains to Grace Cemetery, where she was laid to rest by Hon. B.K. Bruce, John F. Cook, Jas. Wormley, Dr. Green, B.D. Woods, and Robert Parker, the pall-bearers.”

In “The Burial Grounds of Black Washington: 1880-1919” published in Vol. 52 of the Records of the Columbia Historical Society, Steven J. Richardson writes, “The only predominately black cemetery that interred a significant number of whites was Graceland Cemetery, established in 1872. Located just south of Mount Olivet on Bladensburg Road, just beyond the Florida Street boundary, N.E., Graceland was a popular biracial cemetery during its brief existence.”

Between 1880 and 1894, Graceland buried 4,722 black Washingtonians and 1,073 white Washingtonians. In 1890 and 1891, Graceland was the final resting place for more blacks than any other cemetery in the city.

Its popularity notwithstanding, with development encroaching and its location on “marshy land,” Graceland closed on July 23, 1894. Many were reinterred at the recently opened Woodlawn Cemetery, on Benning Road NE. (The final resting place for Blanche K. Bruce, John Mercer Langston, and other men and women of local and national prominence.)

So, that means Anna Murray Douglass is buried in Woodland Cemetery and cared for and watched over by the retired United States Marine Tyrone F. General and his corps of volunteers and patriots that are saving Woodlawn, right? No. Today Anna Murray Douglass is buried at Mount Hope Cemetery in Rochester, New York alongside her husband, Frederick Douglass. Helen Pitts Douglass, the second wide of Frederick Douglass, is also buried in Mount Hope.

I spoke with the clerk of Mount Hope who confirmed that, according to their records, Anna Murray Douglass was buried in Mount Hope in 1882. Unfortunately, there was is no record of the exact date of Anna’s internment, as there is for Helen (12/9/1903).

“That’s quite common for that period,” I was told.

So there it is. Another mystery. I’d imagine there are Rochester and other upstate New York newspaper accounts of Anna’s burial (re-burial) at Mount Hope and I might be able to dig up something in the LOC’s FD papers but more than likely I won’t able to solve this before the final deadline.

This entry was posted on June 13, 2012, 7:09 pm and is filed under Uncategorized. You can follow any responses to this entry through RSS 2.0. You can leave a response, or trackback from your own site.