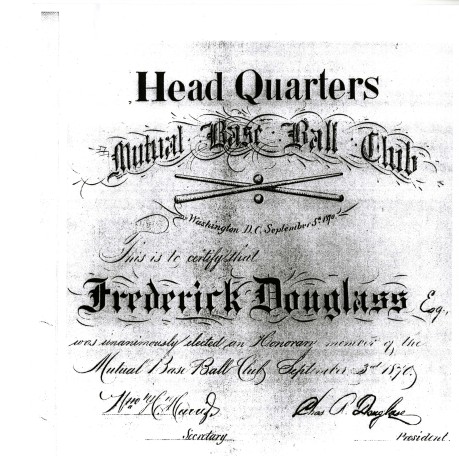 After serving his country in the United States Civil War, Charles Remond Douglass, the youngest son of Frederick Douglass, came to Washington, DC to serve as a clerk in the Freedmen’s Bureau, headed by Union General Oliver Otis Howard.

While all members of Frederick Douglass’ family would eventually settle in Washington by the early 1870s, according to Boyd’s City Directory and surviving letters Charles was the first to settle in the city. By 1869, Charles, living east of the Anacostia River in “Potomac City” (today known as the Hillsdale / Barry Farm neighborhood) was joined in Washington by his two older brothers, Lewis and Frederick, Jr., who had both been in Colorado.

According to records generously shared by the Smithsonian’s Anacostia Community Museum, by September 1869 Charles Douglass was serving as President of the city’s Mutual Base Ball Club, negotiating with opposing teams what field to play on, the rules which would govern the still-evolving game, and how to share the gate proceeds.

According to Ryan Swanson, now a professor at George Mason University, in his dissertation to Georgetown University’s Graduate School of Arts and Sciences, “Jim Crow on deck: Baseball during America’s Reconstruction,” the emerging sport that was sweeping both America’s country sides and industrializing urban centers forged a connection between father, Frederick, and son, Charles. This ageless connection between father and son that the game supports is why baseball is rightfully known as America’s pastime.

“Charles Douglass, son of Frederick Douglass, for one knew what it was to work with white men (in the Freedmen’s Bureau and the Treasury Department), but he seemed enthused particularly about playing baseball among black men.

First with the Mutual Baseball Club and then the Alerts, Douglass enjoyed the challenges and expressive freedom of bringing together a group of black men. Black ballclubs served as tools to demonstrate equality. Douglass kept his famous father apprised of his baseball activities, often sharing his thoughts on how the game served to improve general perceptions of black men in the community: “Dear Father, The club to which I belong in a game of base ball with the Olympics (white) were beaten by a score of 24-15, so you see we played them as close as the Mutuals [white] of New York did,” he wrote in the fall of 1869.”

The next year, Charles’ father was unanimously selected as an “Honorary Member” of the Mutual Base Ball Club.

This entry was posted on May 2, 2012, 11:21 pm and is filed under Uncategorized. You can follow any responses to this entry through RSS 2.0. You can leave a response, or trackback from your own site.